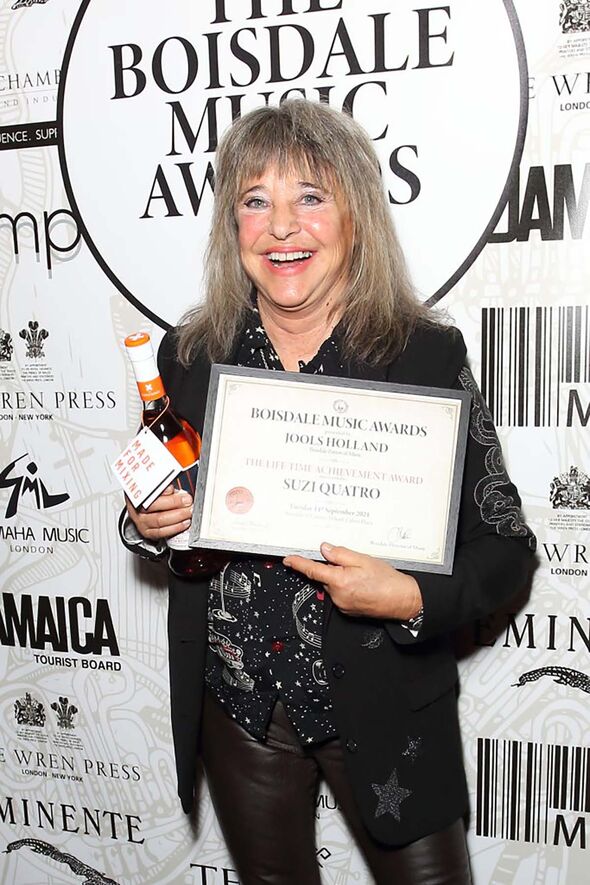 “I wanted to see the film with an audience,” Suzi, 71 explains. “So I slipped in at the back and watched it with people for the first time. Debbie Harry, Joan Jett and KT Tunstall all came on screen saying, ‘We wouldn’t have done what we do if not for Suzi.’ I was in tears!

“The next day I called my friend Cherie Currie from the Runaways and told her I’d realised that I’d given permission for women to be different. The phone went quiet and then Cherie said, ‘Ya just got that?’.”

Suzi laughs. The Detroit-born, bass-playing icon, who blitzed the UK with hits in the Seventies, starting with 1973’s Can The Can, was the first female rocker to front a band.

“I didn’t have a role model,” she says. “All I was doing from day one was being me. Whatever I was trying to do had not been done before. And thank God I did it.”

Her uniqueness hadn’t gone unnoticed. She recalls her father, Art telling her, “Boy oh boy, Suzi, when they made you, they threw away the mould.”

She adds, “And before I could say thank you, he said, ‘Thank goodness!’.”

Her Hungarian-born mother, Helen, called her “the wild one” and told her ‘You have the devil in you’ – the first giving Suzi the title for a 1974 hit, and the second for last year’s critically-acclaimed album, The Devil In Me.

She had that indefinable X factor. Mickie Most, the 70s equivalent of Simon Cowell, caught her performing within a band called Cradle at a Detroit club in 1971.

Afterwards he called his wife Christina back in London.

“I’ve found it!” he told her excitedly. “What?” she replied.

Most was the second record company mogul to offer Quatro a deal that week. She says, “Elektra wanted to make me ‘the new Janis Joplin’,” she recalls.

“Mickie Most said ‘I’m going to make you the first Suzi Quatro’.”

She went with Most’s RAK Records. He set her up in a London hotel, but it took months for something to spark.

The band, including lead guitarist Len Tuckey – her future husband – opened for Slade, with Thin Lizzy as the support act; and Most recruited glam rock wizards Mike Chapman and Nicky Chinn (aka Chinnichap) to “craft the magic three-minute single.”

Suzi and Tuckey were living on the top floor of a house in Crouch End when the sorcery kicked in.

“The phone rang at 8.30am, and the lady who owned the house called me down,” Suzi recalls. It was most telling her RAK would hire a plane to fly the band to Bristol for their gig that evening.

“I hated flying, and he knew it, so I asked why. He said, “Because you’ve got to do Top Of The Pops. You’re number one!”

That was Can The Can. “The phone rang off the hook all day, champagne arrived from the label, flowers. It was like bedlam. It was fantastic! I went through a 24hour ego-trip, walking around like I was Marilyn Monroe.

“The next day I looked in the mirror and said ‘You idiot!’ I sat down with my ex for coffee, and he said ‘Welcome back, Suzi’. It went to my head just for one day. I am so down to earth…”

And she is still, 56 million record sales later.

“They worked in tandem with me,” she says. “Every song was tailored to my personality” – which is full on.

Even now, Suzi admits “I’m not into relaxing. If I’m watching a movie, I’ll play Scrabble at the same time. I can’t ever be still. At Catholic School I was thrown out of first grade because Sister Inez said I drove her mad.

“Impatience is my worst quality. I’m Dr Quatro now, honorary doctorate from Cambridge so I can say, ‘I am Dr Quatro and I don’t have any patience’.”

Suzi was five and a half when her life changed forever. The family were watching the Ed Sullivan Show, and Elvis came on performing Don’t Be Cruel. Her sister Patti, nine years older, started screaming.

“A little light bulb went off inside my head; I decided there and then, I’m going to do that!”

Quatro is her real name. She’s Italian on her father’s side – her grandfather Michael Quattrocchi [CORR] emigrated from Palermo, Scilly, aged nine, but had his surname shortened by US immigration officials.

Her father worked for General Motors by day, and played keyboards in the evening with his Art Quatro Trio – Suzi played bongos on stage with them aged six.

“He had his own agency too; he gave me my work ethic.”

5ft tall tomboy Quatro was athletic and a self-confessed “smart-ass” who liked the company of tough boys. From 14, she played in a show band called the Pleasure Seekers with two of her three sisters.

“Until 1970 I’d sung 99% of the songs, I was the show! But then we became Cradle and brought in my little sister to do most of the singing.

“When Mickie Most came to see us, with Jeff Beck and Cozy Powell, I only did two songs. I took the mic and said ‘Here’s one I wrote, Brain Confusion’ [the B-side of her first single] – and followed that with Jailhouse Rock.”

Yardbirds star Jeff nudged Most and said “the bass player”; he replied, “I’ve got it already.”

Equally impressed, the UK rock press later described Quatro variously as ‘a tattooed tomboy’, ‘a hell-cat’, and presciently in 1973 ‘the world’s only female punk rocker’.

Adored in Australia and Germany, she had no US hits until 1978’s Stumblin’ In with Chris Norman from Smokie, by when she was well-known for playing Leather Tuscadero on TV’s Happy Days. The character was “the female Fonz” – typecasting!

Unwilling to exploit her sparky sexuality, Suzy only did a Penthouse shoot because they allowed her to pose clad top-to-toe in white leather.

She married Len Tuckey, two years her junior and five times her size, in 1976. They had daughter Laura, a radio broadcaster, and musician son Richard, but divorced in 1992. She wed German concert promoter Rainer Hass in 93.

Suzi’s career has been eclectic. She writes poetry and wrote a musical about Tallulah Bankhead, but never stopped touring.

“We did 85 shows around the world in 2019 and had 95 in the book for 2020…and then lockdown! Luckily, I had built a little demo studio and instead of touring my son and I wrote and recorded The Devil In Me”.

Now a grandmother, she has published three books, is about to publish her second poetry collection, and is working on a film dramatization of her life. Her new boxset of her 70s albums hit Number One on Amazon on pre-sales.

Suzi plays the Royal Albert Hall on Wednesday [20th] and has been rehearsing the whole two-hour show in her Essex living room, including talking to the audience.

“I’ve always had work ethic,” she says. “I was always very focused and very serious about what I do.

“I do everything with total commitment.”

70s icon Suzi Quatro looks back at her phenomenal career