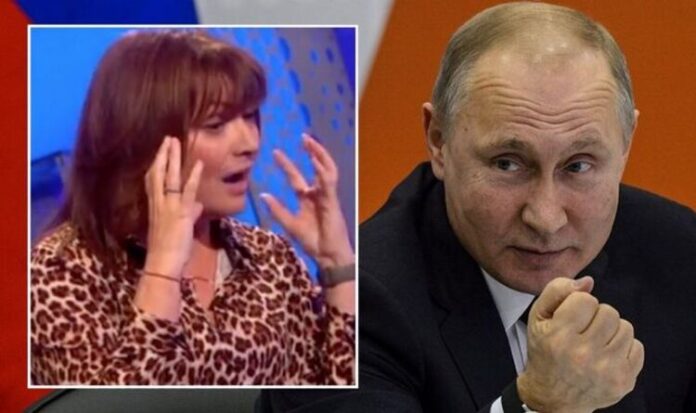 The Last Leg made its return on Friday night with hosts Josh Widdicombe, Adam Hills and Alex Brooker, who were on hand to offer up all their honest takes of the week so far. Scottish presenter Lorraine Kelly appeared as a guest, besides comedian Richard Ayoade, on the hit Channel 4 programme when the Russia/Ukraine conflict was brought up for discussion, and when it came to sharing her thoughts over Russia’s president Vladimir Putin, the daytime host didn’t hold back any punches.

Host Adam quizzed Lorraine: “How is World War Three going for you?”

She replied: “Oh my god. We’re just getting out of the darkness of Covid into the light and then, wham.

“I wonder what is going on with this odd, strange, nutty person that is Putin.”

Bewildered by the Russian leader, the TV star asked: “What is going on?”

Lorraine continued: “You have to ask yourself, what is the end game here?”

Turning to Josh, she swiped: “You were worried about [Putin] not being angry, you can’t tell.

“You can’t tell anything with him because he’s had so much work done – allegedly – that his face is just so weird.

“It looks like a candle has melted, and then hardened,” she told Channel 4 viewers.

Lorraine went on to compare the leader to character Vincent Price from the film House of Wax, pointing out: “He had a face like that, then someone battered him and there was a horrible monster underneath.”

In jest, Alex said: “It’s very rare that someone says you’re too young to remember something isn’t it?”

The former Daybreak star responded: “You’re only a child, it’s like something out of Game of Thrones.

“I don’t understand why this would be happening, I feel like I’m living through the worst dream.”

Josh chuckled: “I like how you said ‘allegedly’ because you’re worried Vladimir Putin is going to take time out from the war to sue you.”

“Obviously, he has, nobody’s got a face like that, weren’t born with that wee face I don’t think,” Lorraine concluded.

Meanwhile, Putin’s invasion plan is in disarray after a crucial part of his Ukraine strategy failed to materialise, humiliating the Russian president.

Sky News correspondent John Sparks confirmed that ethnic Russians in Ukraine are refusing to support the troops entering the country.

The Sky News correspondent stated: “The people who live in these cities have largely stayed put.

“They have been in and out of the bomb shelters today.

“Kharkiv has a large ethnic Russian population. It sits close to the Russian border and tens of thousands of Russians were brought there during the Soviet era.

“But if Putin thought he would receive support for his invasion from ethnic Russians in Ukraine, well it is not happening. It is proving to be a mistake.”

The Last Leg airs Fridays from 10 pm on Channel 4.