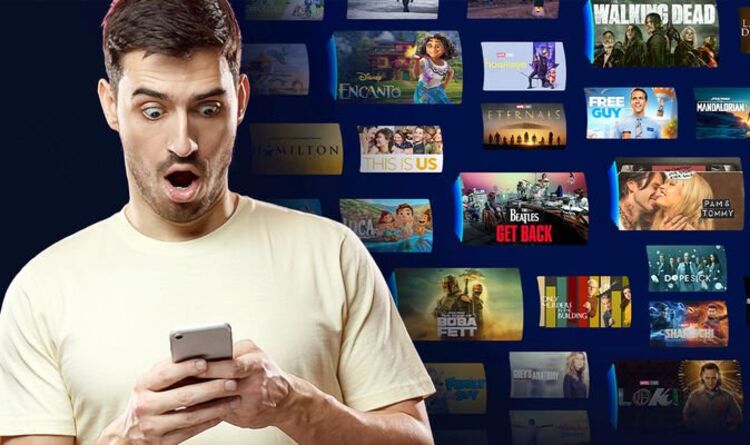 Disney+ is about to enjoy a flood of new boxsets and movies …and a price rise to reflect the influx of new content. The Netflix rival, which launched in the UK in March 2020, has suffered from widespread production delays due to the ongoing global health crisis. As a result, Disney+ has been slower to expand its catalogue of titles compared to long-established rivals, like Prime Video and Netflix. Disney+ CEO Bob Chapek recently told shareholders that the amount of content coming to its streaming service is set to double in the moving months.

Disney+ has already achieved the goal of debuting a brand-new title on its service every single week, but it’s not stopping there. Chapek told shareholders that he wanted even more new shows and movies coming to Disney+ next year – rapidly expanding the library of content available to new and existing subscribers.

Disney+ has enjoyed a huge amount of success with its exclusive shows, such as The Mandalorian, The Book Of Boba Fett, WandaVision, Loki, and Hawkeye. Under the adult-focused Star sub-brand, Disney has also launched a number of critically-acclaimed shows, like DopeSick, which examines the opioid crisis that has ravaged the United States, Pam & Tommy, a black comedy about the Baywatch star’s infamous sex tape, and The Dropout, a true-crime series that dramatises the Theranos start-up established by Elizabeth Holmes.

But with the wealth of new shows on the way, CEO Bob Chapek has also promised a price rise for all subscribers.

As it stands, Disney+ costs £7.99 a month. Unlike Netflix, it doesn’t charge customers extra to stream in higher quality (High Definition, or 4K Ultra HD) or to watch on more devices simultaneously. Instead, it’s a one size fits all approach. Every Disney+ subscriber can watch in Ultra HD if their streaming device and TV supports the pixel-packed format and on up to four devices at the same time.

For comparison, Prime Video costs £5.99 a month and also includes 4K Ultra HD as standard. However, this is also included as part of Amazon’s Prime membership, which bundles next-day delivery, unlimited cloud backup for photos, and free music streaming on Alexa-powered devices for £79 a year. Netflix starts from £6.99 for its Basic package, which doesn’t include access to High Definition and only allows streaming on a single screen at any one time, and tops-out at £15.99 a month for Premium, which unlocks 4K Ultra HD, the ability to save downloads to watch offline and stream on up to four devices simultaneously. Meanwhile, Sky’s NOW membership, formerly NOW TV, charges £9.99 a month for access to its live channels and 500 on-demand boxsets, including the likes of Mare Of Easttown, Euphoria, Yellowjackets, The White Lotus, The Gilded Age, and more.

With double the number of boxsets and blockbusters on the way, Disney+ is likely to want to position itself closer to Netflix’s Standard Plan (£10.99 a month) or NOW’s Entertainment Membership (£9.99 a month). But while CEO Bob Chapek has confirmed that a price rise is incoming, the House Of Mouse has previously revealed plans to introduce a new ad-support tier to its streaming service.

Will Disney+ follow in the footsteps of music streaming services like Spotify and use the revenue from advertising to subsidise the monthly fee, making the ad-support tier cheaper than its current £7.99 a month plan? Or instead, will the ad-free subscription increase in cost to the same £10.99 a month as Netflix charges for High Definition streaming, while the current £7.99 a month price point remains …but with ad breaks?

Only time will tell. Disney+ has confirmed that advertising will be introduced in some regions worldwide before the end of the year, so we’ll have a better idea about the price changes in the coming months. In the meantime, there’s still time to guarantee a lower cost for an entire year.

Disney+ sells annual subscriptions to its streaming service at a cost of £79.90. That’s a 15 percent saving compared to paying each month and, crucially, it guarantees that you’ll only pay the lower fee for the next 12-months. When Disney+ launched its Star sub-brand in the UK last year, it raised prices for all subscribers. However, those who bought an annual subscription plan managed to escape the price rise for an entire year.

If you’re worried about the cost of streaming the latest blockbusters from Marvel, original series set in the Star Wars universe, the latest films from Pixar Studios, documentaries from National Geographic, and every episode of The Simpsons …there’s never been a better time to lock-in an annual plan.

The next Google Nest Hub might not live up to your...