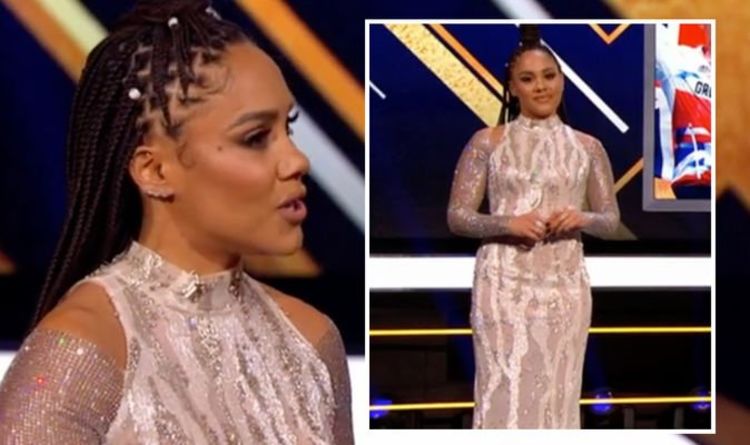 Gary Lineker, Gabby Logan, Clare Balding and Alex Scott took to the Sports Personality of the Year stage on Sunday night to crown this year’s winner. With six athletes for BBC viewers to choose from following a remarkable year of sporting triumphs, millions tuned in to see who would bag the prize. However, just moments into the show, it was presenter Alex Scott who stole the show as she donned a sparkly dress which definitely didn’t go unnoticed.

Taking to the stage at Media City, Salford, Alex wore a white and silver striped dress complete with separate and glitzy sleeves.

The dress certainly stood out among her co-hosts as Gary opted for a classic black suit while Gabby had opted for a black dress.

Clare, on the other hand, opted for a brightly coloured orange, patterned jacket and black trousers.

But it was Alex’s outfit which got viewers talking the most, with a number taking to Twitter to share their thoughts.

And it’s safe to many were divided on the eye-catching number for the awards ceremony.

Twitter user @woahmitchell weighed in: “Alex Scott… genuinely one of THE most stunning women alive. #SPOTY.”

And @Chapmancmc1882 argued: “Has Alex Scott just stepped off the set of Dune?” (sic)

While the host’s outfits may have been the centre of attention at the start of the show, this year’s nominee soon took centre stage.

And this year’s shortlist boasted some of the world’s best and biggest names from the sporting world.

Manchester City and England footballer Raheem Sterling is up for the award given his club’s Premier League-winning campaign and England’s Euro 2020 run.

Emma Raducanu has been tipped to lift the trophy after an unforgettable run at Wimbledon as well as US Open glory.

Heavyweight champion boxer Tyson Fury made the list after defeating Deontay Wilder and cementing himself as one the greatest boxers of all time.

And Paralympian Sarah Storey completed the list of nominees following a successful time in Tokyo for the Paralympics.

The Sports Personality of the Year Awards is available on BBC iPlayer now.