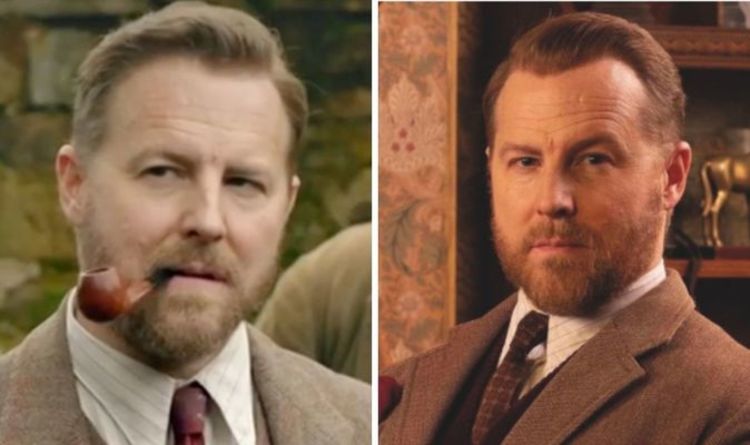 All Creatures Great and Small star Samuel West joined the Welcome to Yorkshire, Talkshire podcast with Caroline Nickle to discuss the Channel 5 series. Samuel touched on how lucky he felt to be able to play Siegfried for two series now and was thankful for the viewers for keeping the series alive. He also spoke about his character Siegfried Farnon and explained the tragic backstory which contributes to his short temper with a lot of people.

On being asked what it’s like to play Siegfried, Samuel began: “I mean, I should say this is one of the things I’m most proud of now.

“Not only to be working at a time when many of my friends aren’t but to be doing such a great part in an iconic story that means so much to people, not just in Yorkshire but all over the world.”

Moving on to Siegfried, Samuel explained: “Siegfried is a man who marches to the beat of his own drum, I think he’s fairly shameless, almost entirely short-tempered but doesn’t bear grudges.

“Quiet absent-minded and irascible but deep down very loving, he’s a very layered man, and one of the tricks of an acting job is to say, ‘Ok, I’m playing a dictator what’s he particularly fond of?’

“He can be completely irascible, but he adores horses, like many people of his age, he had a bad war, bad first world war,” he revealed.

Samuel continued: “[He] came back from the great warlike many people did rather preferring animals to people.

“But I think he learns through, well certainly the first two series so far that James Herriot who is this young vet who has arrived from Glasgow.

“He is not only somebody he respects and rather needs for the success of his practice but ultimately loves and has a real fondness for and sort of turns into the son he never had.

“But at the same time, he is trying to negotiate life with his brother Tristan who he wishes he didn’t have, who is much younger than him and whose father kind of left the care of him to.

“And that brings its own tensions, but yes, Siegfried’s a very complex and quite funny kind of character, who I really love playing.

“We make a very happy ensemble, so the pleasure of being able to do this lovely job twice so far in two series, it’s really nice people have liked it enough for us to do it twice,” he said.

Donald Sinclair was the inspiration for the character of Siegfried Farnon, and Samuel opened up about the pressures he feels to do the role justice.

He revealed: “It helps when there’s people like Rosie and Jim, Alf’s [Wight] children who knew Donald and in fact Andy our Veterinary consultant who worked with Donald right at the end of his life.

“He managed to keep his job because Donald, I mean Andy’s words were made in the end, but particularly short-tempered and absent-minded at the end of his life.

“And he used to tell his assistants of which they were a legion, that he’d done something, and they would remind him that he hadn’t done it.

“And he’d get very angry and sack them, and the way Andy managed to keep the job was by saying ‘Yes, of course, I’m so sorry I’ve forgotten’ so Donald didn’t sack him, and Andy stayed with him till the end of his life.”

Samuel explained Andy gave him a wooden hood knife on the first day he was working with animals and soon realised it was Sinclair’s knife he had once used.

“I looked down at it, and on the wooden handle in faded biro, it said D. Sinclair.

“He had given me Donald to do the scene when you’re trying to make yourself believe that you are somebody anything helps really.”

All Creature Great and Small series one and two are available to watch on My5.