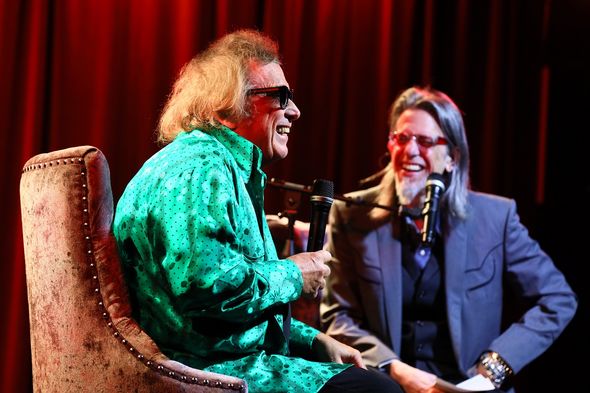 “I haven’t got a handle on anti-vaccine people like Eric Clapton. It’s a little strange.” The star, whose breakthrough album American Pie was released fifty years ago, is more concerned with mounting attacks on free speech and free expression sweeping the West. “Political Correctness in America is making it impossible to determine what people really think about things,” Don, 76, tells me. “They stick to one side or another of a little rulebook.

Don McLean and Paris Dylan pose as he is Honoured With Star On The Hollywood Walk Of Fame (Image: Getty)

“I am an intellectual of some sort. I can take ideas from both sides. I can talk openly with my girlfriend” – Paris Dylan – “but you can’t do that in public because people are offended and become your enemy instantly if you voice an opinion they disagree with. Such emotion! It’s like the Vietnam War days. Families broke up over it; parents and children, brothers and sisters… These are anti-intellectual times. I thought I’d live long enough to see things become more enlightened, but it’s going the other way.”

It’s the opposite of the spirit of McLean’s youth when rock ’n’ roll shook up conventions and articulate young singers lucidly questioned everything. The singer-songwriter was born in New Rochelle, New York. “Google Rochelle then look at the notable people from there – there are about 250,” he says. “Opera singers, actors, sports stars, playwrights… George M. Cohan wrote the musical Forty-Five Minutes From Broadway about it… We lived in a small house on the tip of a very nice neighbourhood. All the other houses were bigger.”

McLean’s frugal father Donald, the district manager for an energy company, died when he was fifteen. “It was a snobby neighbourhood. They certainly looked down at me after Dad died. We were out of that house and into a two-room apartment for seven years. I was at the bottom of the totem pole as far as friends were concerned.

“My mum was ostracised for being a widow – single women didn’t fit, plus I aspired to be a musician which made me like a circus performer in their eyes rather than a serious young man who aspired to a job in New York City…I didn’t care for that.” He’d caught the music bug in his early teens. “I’d immersed myself in Buddy Holly, and February 3rd 1959” – the date 22year-old Holly, along with Richie Valens and the Big Bopper, died in a plane crash – “broke my heart and still breaks my heart. So much feeling… it reaches out to me every time.”

It took ten years before Don found a way to channel those emotions. Holly’s death became ‘the day the music died’ in American Pie, his brilliant first hit, never fully explained but rated one of the top five songs of the 20th Century. It became an anthem for a generation, with references to the King – Elvis – the Beatles, Stones, Byrds, the jester – Dylan – Charles Manson, Altamont and more. Asked what it meant McLean famously replied, “It means I’ll never have to work again.”

Don now owns a farm in Maine, Connecticut, and a house in Palm Springs, in the Californian desert – a long way from his beloved New York Yankees. A self-confessed loner, he went through a second divorce in 2016 and lives with model Paris, 27. He has a star on the Hollywood Walk Of Fame and a mural on the side of his childhood home – “so some people got me wrong”.

In 1971, American Pie changed his life but success hadn’t come easy. His first album Tapestry had been rejected by 72 record labels – despite featuring classics like Castles In The Air and And I Love You So, a hit for Perry Como (and the theme for Prince Harry and Meghan’s wedding).

“They turned me down because they wanted the publishing and I didn’t want to part with it,” Don explains, adding that they were also obsessed with finding the next Archies. My ex-manager borrowed $20,000 from his father to make Tapestry. I was $20grand in debt within two minutes of graduating from college. Luckily the MediaArts label came along and paid my debts” (although, in the 80s, it took a court case for him to recover his rights).

“All the songs on Tapestry spoke for a central idea of something going on in America, the craziness of America. I established my beachhead with that album.” McLean started learning guitar at 13; five years later he won a folk singing contest on Long Island and then cut his teeth on the New York folk scene. “I was perfectly suited for that world. I was getting work in little nightclubs. I was an opening act in Greenwich Village ‘getting my feet wet’ while still at school.”

His influences – rock ’n’ roll, sixties folk and pop – were all distilled into the spell-binding eight-and-a-half-minute odyssey of American Pie. But he says, “Explosive fame made me very unhappy. Fame is fun for about two weeks. Your life is changed, it makes you an odd person. You’re not normal anymore and people aren’t honest with you…you’re always centre of attention. It’s not good for you.”

Roberta Flack’s 1972 hit Killing Mr Softly With His Song was written about him. “Be fair, I was beautiful back then!” he laughs. McLean’s ancestry goes back to the Scottish island of Iona on his father’s side, and to central Italy on his mother’s. “She was Catholic, dad was Protestant,” he says. “I went to Iona Prep school, a Catholic school.”

He has a soft spot for British audiences. “They were the first to accept me, as opposed to accepting American Pie. Brits stick with you through thick and thin for decades, they’re not fickle as long as you do your job.” Don’s 1972 Albert Hall gig was “one of the greatest of my life.”

He’s back here next year, on the delayed tour celebrating American Pie’s 50th anniversary. The album  contains more of his best-loved songs, including Vincent, Winterwood and Crossroads. “A lot of fine artists came out with their best work in 1971, Marvin Gaye, The Beatles, the Beach Boys,” muses Don. Modern music leaves him cold, though. “It’s not my cup of tea, powerful rhythm tracks with repetitive lyrics that don’t deliver an idea… but that’s what people like. I don’t understand it but it doesn’t mean it’s not valid.”

He lives comfortably now, with horses in Maine and fruit trees in California. “I’m a transplanted easterner, but I love the desert. It’s the last phase of my life I suppose. I like to go to Happy Hour and talk about stuff with intelligent people drinking whisky.”

Don has signed up with an auction house to sell his guitars, banjos, song lyrics, hunting knives and custom-made cowboy boots after he dies. Proceeds will go to the Don McLean Foundation, which funds poor students to go to college, and supports homeless shelters in Maine.

Before then? “I want to experience the world, the earth, the different climates and topography,” he says. “The old cowboys had it right, let’s go and see some pretty country. It’s mighty beautiful in England too. I love driving there and seeing the rolling hills and farms. I like being myself. I don’t need to have people’s approval.”

Don McLean celebrates 50 years of American Pie with a UK tour next year. Visit his website for more info.