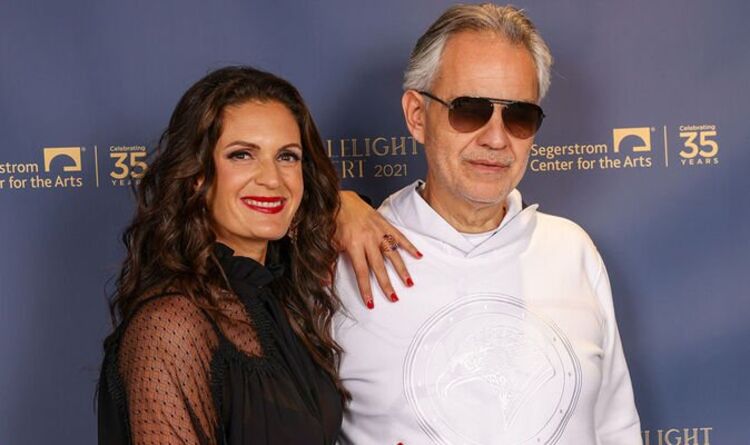 Andrea and Veronica are currently on the road, along with their daughter Virginia, for his latest US and world tour. Virginia is becoming a star in her own right and regularly joins her father on stage to perform their, by now signature, rendition of Leonard Cohen’s Hallelujah. Andrea’s youngest son Matteo, from his first marriage, has already embarked on his own solo career, a succession of recent single are building to his upcoming debut album. Matteo’s brother Amos is also a talented musician, who prefers to stay out of the limelight. Veronica, however, has always focussed on the business side of her husband’s career, apart from a very rare and moving moment on stage.

They frequently share social media posts about their accomplishments as a family, and the numerous charitable works of the Andrea Bocelli Foundation, but very rarely appear on stage together to perform.

One very special moment was part of a live show at the grand Hollywood Dolby Theatre, which was built in 2001 as the primary site for the annual Oscars ceremony.  Although the show also included duets with vocal powerhouses Ariana Grande and Nicole Scherzinger, the award for the most romantic song of the night definitely went to the Bocellis. You can watch it in full below.

The song was originally from the iconic 1935 movie musical Top Hat and performed by Fred Astaire and Ginger Rogers.

The silver screen stars were, of course, best known for their extraordinary dance routines, so it seems fitting that Andrea and his wife should also flash some fancy footwork themselves.

After a little shuffle arm in arm they resume the song and finish with one last “cheek to cheek” when they press their faces together and then Veronica turns and gives her smiling hubby a kiss.

Andrea previously described the moment they met:  “Veronica and I met at a party… and I was struck by her voice and how her skin felt. I sang my first aria for her that night. It was a piece called Occhi Di Fata (Fairy’s Eyes).”

Veronica added: “I was 18 and meant to be going somewhere else that night. Everyone was late because of bad weather, so I sat by the piano in an empty room. Andrea sent a friend to ask me to come to his table. We talked about music and where I was born…

“I had an exam coming up, so I had to go, but he didn’t want me to. “Stay,” he said. “Don’t lose the energy. Don’t lose the moment. Love is something you don’t think about.” So I stayed.”