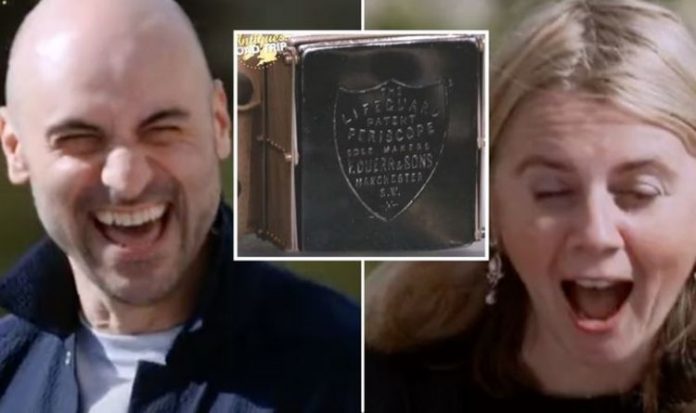 Antiques Road Trip experts set off on a road trip across the country searching for treasures in a bid to make the most money at auction. One of the show’s regular contributors, Catherine Southon, has also featured on hit programmes such as Bargain Hunt, Flog it! Put Your Money Where Your Mouth Is and Trade Secrets. Having a keen eye for fine antiques, the 47-year-old collector founded her own auction house in 2012. During a classic episode of the show, the presenter was left gobsmacked at the “incredible” profit made for a World War One periscope.

According to the Canadian War Museum, the trench periscope is an optical device that soldiers used during the First World War to observe the ground in front of their trenches without becoming a target for enemy snipers.

While introducing the item, the auctioneer said: “I’ve got lots of interest on this [WW1 antique].

“I’ve got four commission bids left on the book and I can open up the bidding at £220.”

Viewers at home saw the value of the object increase rapidly, but at such a huge value, the bidders didn’t stop there.

In shock, Catherine exclaimed: “No way!”

In the auction house, the WW1 periscope was yet to value while the price continued to rise.

The pair, who watched the events unfold in a garden outside in the sunshine, couldn’t help but express their surprise.

Southon’s fellow guest responded to the latest figure: “No chance!”

To which the expert shortly followed with: “£400?”

In jest, her co-host said: “I might just go home now.”

As the estimation approached £480, the Bargain Hunt star in astonishment, confessed: “I can’t believe this.”

The phone bidder took the final call as they wagered in at an incredible £480 for the WW1 optical antique.