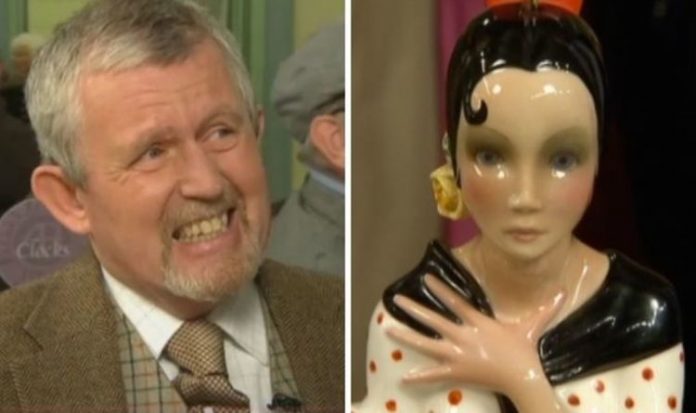 Collectables expert Will Farmer was presented with a porcelain Spanish dancer his guest had purchased from a charity shop for £29 who recognised it was created by Lenci, having seen similar figures on Antiques Roadshow. Will, who confirmed the figure was designed by Helen Konig Scavini for Lenci in the 1930s, was astounded his guest purchased the figure for such a low price. After explaining the history behind the ornament, Will left his guest stunned when he revealed the value of the item.

During the classic Antiques Roadshow episode, Will inspected the Spanish dancer’s black and white ruffled polka dot dress and her immaculate eyeliner and lipstick.

He said: “25 years ago, shall we say at the age of 13 years old, I walked into an antique fair and acquired by very own example which was exactly the same. But tell me where’s yours from?”

The guest replied: “I bought it in Whitby about six months ago at a charity shop.”

Will gasped: “Good grief, I have to ask, how much?”

The guest revealed he purchased the Spanish dancer for £29.95, to which Will said he had a “seriously good eye” for antiques.

Will asked his guest what made him buy the ornament and he explained he knew she was by Lenci and thought she was really beautiful.

The guest added: “When I picked her up I saw the mark so I know she had a certain value.”

Will explained Lenci, in the 1920s and 1930s, was the jewel in the crown of the ceramic industry before lifting the doll and revealing the word Lenci on the base.

The Lenci Company was established in Turin after the First World War around 1918.

It produced not only high-quality dolls, but luxury goods, toys, puppets and household wares, including decorative ceramics.

After further inspection, Will revealed the figure was now worth between £2,500 and £3,000 which left his guest gobsmacked.

The stunned guest told the expert: “Really? I’m astonished at that.”