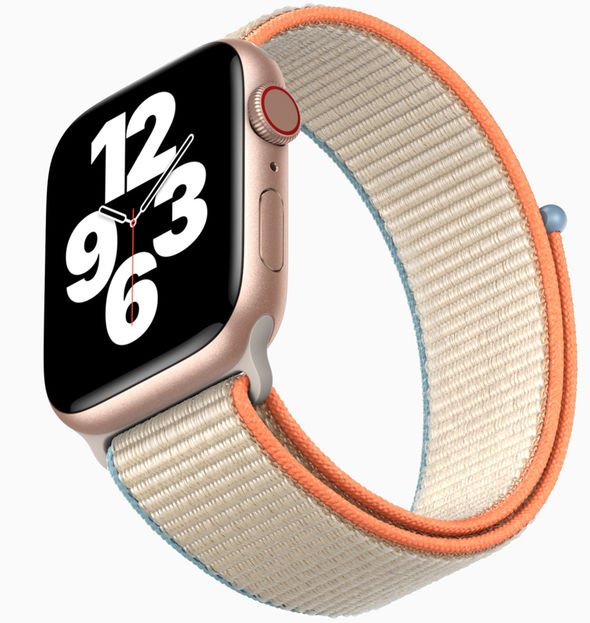 Apple is back with not one – but two – brand-new smartwatches. The US technology firm revealed its latest tech timepieces during an online event earlier this week. The refreshed line-up includes the Apple Watch Series 6, which builds on the foundations of the Series 5 model launched last year, and the Apple Watch SE, which basically is a Series 5 with the electrocardiogram (ECG) and always-on display removed and the price tag significantly dropped.

Both devices are available to buy today, but are they really worth investing in? Express.co.uk has had the chance to strap both the new Series 6 and SE to our wrists ahead of the worldwide launch and our answer is “yes”.

By changing the formula and launching two new Apple Watch models this year, Apple has lowered the barrier of entry. Of course, those who want the best of the best can buy the fully-loaded Apple Watch Series 6, but the Watch SE features some immensely impressive specs at a price that more people are going to be happy to pay.

So, let’s start with the Series 6. This Apple Watch is easily the most exciting to anyone who currently owns an Apple Watch and fancies a serious upgrade.

Although the design still looks identical to its predecessor, there are now two new colour options to choose from: a bold PRODUCT(RED) version and a classy Blue. Both of these new colours are also available in the aluminium cases. Apple says it has tweaked the Gold and Space Grey shades in the pricier Stainless Steel cases, but essentially, they’re still Gold and Space Grey.

We’ve taken delivery of the Blue aluminium model, which we’re pretty smitten with. Apple has added a subtle splash of colour without making its wearable seem too gaudy.

No doubt these new colours will prove hugely popular and it’s nice to see Apple finally adding more options to the range.

While the OLED touchscreen is the same size as the previous two models, it’s now been made much brighter. In fact, it’s 2.5 times brighter than the Series 5.

This not only makes it easier to see when using it outdoors, but also boosts the appearance of the dimmed always-on screen too. The latter was the main addition seen in the Series 5 last year and means you can constantly see the time without needing to raise your wrist. However, to save battery, the OLED display dims which obviously makes it slightly harder to see.

With the new Series 6, that dimmed look is noticeably brighter at all times, so you should never have a problem checking the time or seeing if you’re any closer to closing those activity rings.

Inside the Apple Watch Series 6, there’s a new S6 System-in-Package (SiP) which improves the performance by around 20 percent. The Series 5 was no slouch but things such as animations and scrolling through message do feel even smoother on this latest model.

Of course, the Apple Watch has become renowned for helping people stay fit with features such as heart rate tracking and being able to take an instant ECG by simply placing your finger on the Digital Crown.

Those features remain but the Series 6 takes thing up another notch.

That’s because on the rear case is a new sensor, which monitors Blood Oxygen levels. Having put it to the test it’s really simple to use and we were chuffed to bits to find our levels at 100%. It’s worth noting that Apple is not pitching this as a medical feature – so you won’t be able to detect whether you’ve contracted Covid-19 or any other respiratory conditions by checking how oxygenated your blood is.

Instead, this measurement is purely for fitness, so don’t buy this device thinking it will warn you of any lung functionality.

Another feature worth mentioning is that the Series 6 now includes an always-on altimeter which provides real-time elevation so you can see exactly high you’ve climbed on your next hike. There’s also improved charging times which means this device can get a full refill in around 90 minutes.

That could be vital as with watchOS 7.0 now including sleep tracking you might want to wear it all night then give it a quick boost before heading to work.

One thing you won’t find arriving with any new Apple Watch is charging plug.

It’s a bold move from Apple, but the firm says it’s trying to cut down on electrical waste and most homes already have enough of these little white USB wall plugs – without needing more.

The Apple Watch SE starts at a much lower price (Image: APPLE)

That makes sense. And being honest, we’ve all probably got spare plugs that’ll fit a standard USB cable in the back of a drawer somewhere. But if you have a shortage of wall chargers – you won’t find one in the box with your new £379 smartwatch and you’ll need to buy one from Apple separately at a cost of £19 for the standard 5W plug, or £29 if you want the plug with foldaway pins to make it easier to store when travelling.

It’s worth noting too that luxury French brand Hermès seemed to miss the memo about the new planet-saving initiative as these luxury versions of the Apple Watch Series 6 still ship with the wall charger in the box.

We’ve still got plenty of testing to perform and we’ll have to see how the battery life holds up now the screen is so much brighter. However, the signs are promising and the new features only add to what is already the best smartwatch you can buy.

Next up, it’s the Apple Watch SE, which follows the popular iPhone SE in bringing top-notch specs at a cheaper price point. In fact, you can pick up this device in stores today for £269 – that’s over £100 less than the Series 6.

And don’t think that low-cost means bargain-basement features as this device is more than capable of spending years strapped to your wrist.

In fact, when you compare it to the Series 3, which was the only way of getting a cheaper Apple Watch from the Apple Store before the Watch SE’s release, this is a mighty update.

The Watch SE has the same design as the Series 4, Series 5 and Series 6, which means it boasts a 30 percent bigger display than the Series 3. It’s also two times faster as it’s powered by the same S5 chip found in the Series 5.

Other features include a compass, the same altimeter in the Series 6, water-resistant design and all of those fitness tracking features that will keep an eye on how much exercise you are getting.

In fact, the only things you might miss are the always-on display and, unlike the Series 6 and 5, you can’t take an ECG from your wrist.

Something else that will add to the appeal of the Watch SE is the new Family Setup option which now allows this device to be worn without the need for an iPhone.

It’s basically aimed at children or the older generations who don’t need a smartphone but still want to stay in touch.

As long as someone within the family owns an iPhone it’s very easy to set up and there’s plenty of setting including a Schooltime mode to stop the device becoming a distraction in class. You can even set up alerts so know if your children have arrived at the school gates safely and set limits on usage and who they can contact.

We haven’t had it for long but the Apple Watch SE is definitely a solid wearable that offers very good specs at a reasonable price.

Interestingly, Apple is still selling the Series 3 with the same £199 price tag, so that remains the most affordable option. But for those who want the newer design with larger screen (and the exclusive watch faces created to take advantage of that extra real estate), faster speeds and more, this is a great upgrade for an extra £70.

We genuinely don’t think you’ll be disappointed if you ordered one ahead of today’s launch and the SE is sure to be a massive hit for Apple. Again, we’ll be putting the Watch SE through some rigorous testing in the next few days and you’ll find a full review at Express.co.uk soon.