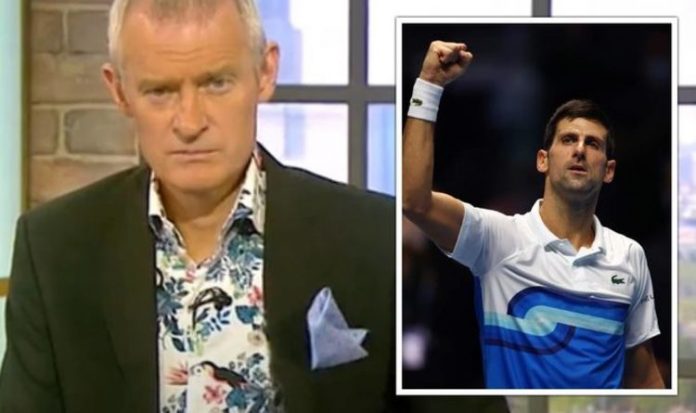 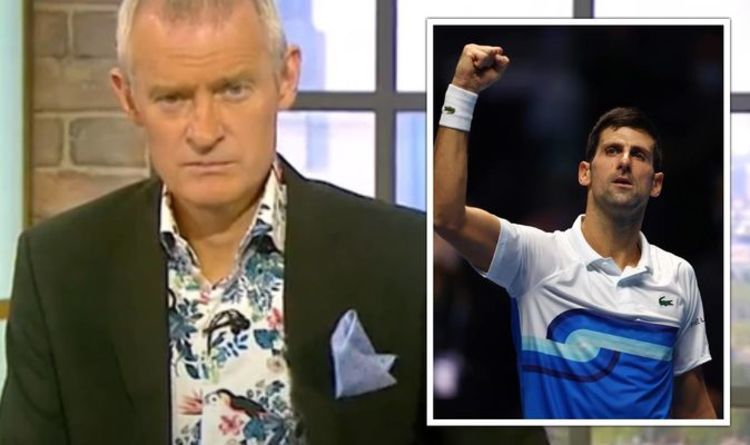 Caller Jessie rang into Jeremy Vine on 5 where she expressed her anger at Novak Djokovic as the tennis star won his appeal against his visa cancellation. Jessie said the decision sent a bad message to the rest of the world where people could ignore the Australian border rules and was angry that Mr Djokovic’s vaccination status was not sufficiently challenged. But the panel criticised Jessie for ignoring the rule of law in Australia herself as one member pointed out he was playing by the exemption rules and had multiple sources to back it up.

Speaking on Jeremy Vine on 5, caller Jessie was angry that Djokovic’s case may make people think that they can “disregard” the laws in the country.

She told the panel: “The rules into Australia are very clear, Djokovic has had 18 months to be vaccinated.

“I haven’t had the opportunity for three years to go back and visit my family in Australia because of quarantine.

“And because I have children and depending on what age they are, they have to get vaccinated…

“So Djokovic having Covid in December does not negate him from being vaccinated.”

Jessie said the UK may have a “pro-choice” approach but the rules in Australia were clear.

He said Djokovic was a “premier athlete” who now had to eat “slop” and share his quarters with asylum seekers.

Mr Daubney added: “Djokovic has two medical exemptions that the court of law in Australia and Victoria have just approved.

“So this is a political battle where the federal government is going over the head of its own courts.

“If that happened in the UK, for example over Brexit, or if it happened in America and Donald Trump did it, the same people who are supporters of tyrannical overreach would be up in arms.

“Djokovic has obeyed the rules, he has valid exemptions.”

Jessie then shot down ideas the situation was political against Serbians as Australia lives in a multicultural society.

She added she was angry that she could not get back to Australia and said that it sends the message the rules should be “disregarded”.

Djokovic won his appeal against the cancellation of his visa after border officials threw out the documentation.

The judge responsible for the decision said the correct procedures were not followed which saw Mr Djokovic remain in detention until his appeal.

Djokovic’s visa was cancelled after he arrived in Australia on Wednesday without “appropriate evidence” of his COVID-19 status.

Border officials cancelled the visa and placed him in detention as his appeal was heard on Monday.

The Serbian athlete said he was given a medical exemption to play in the tournament which is within Australia’s rules.

Victoria State, where the Australian Open is taking place, has mandated all staff, fans and players to be fully vaccinated unless there is a medical exemption given.

Court documents show that Mr Djokovic’s exemption was based on a positive test recorded on December 16 and that he has “not had a fever or respiratory symptoms of COVID-19 in the last 72 hours”.

The Australian Department of Health says: “For travel into and out of Australia, travellers must provide proof of COVID-19 vaccination status.”

Only children aged 11 and under or those exempt for medical reasons are not required to follow the vaccine mandate.

Tennis fans celebrated the victory in Australia with police being forced to intervene after some protesters gathered outside of Mr Djokovic’s lawyer’s office.

Police were seen spraying substances at demonstrators who were then seen coughing and crying afterwards.

Novak’s brother, Djordje, told Serbian media: “Novak has shown that he is persistent and that he believes in his ideals, he won this fight for the whole world.

“The judge has made the right ruling based on facts, but we are receiving info that the minister is above the court.

“Novak is in a political whirlwind, the people in Australia are unhappy since they have been locked down basically since the pandemic started.

“It’s definitely politics. What we can do is to let this be known all over social media – they want to capture and lock up Novak again.”