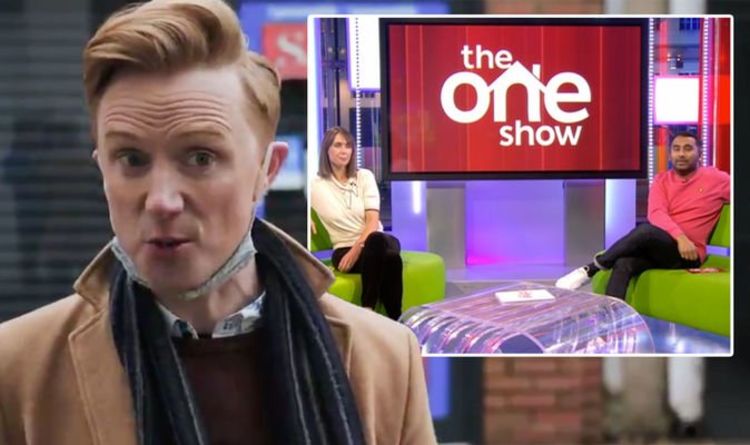 The One Show returned to BBC One this evening with Alex Jones and Amol Rajan at the helm. The two were joined by celebrity guests Julia Bradbury and Rhod Gilbert, but it was a segment from BBC reporter Owain Wyn Evans which had a number of viewers talking. As the reporter headed to Wrexham, Wales to discuss the latest lockdown and coronavirus guidelines with members of the public, several viewers were left fuming when the presenter appeared to move the face mask to below his chin, prompting one viewer to fume: “It is NOT a chin warmer!”

The moment in question came when reporter Owain spoke to a member of the public: “Do you find that other people are sticking to the rules in the same way as you are?”

“Generally speaking yes, yes they are,” the man replied, prompting The One Show presenter to continue: “And how are you finding sticking to those rules?”

“It is difficult,” the member of the public replied. “There are things that you can do, coming into town and having a quick coffee.”

“Well, I won’t let your coffee get cold, enjoy it,” Owain signed off – but it wasn’t the chat itself which caught the eye of BBC viewers.

One fan expressed their dismay on Twitter, saying: “Can not believe you sent that reporter to Wrexham which has the highest rate in North Wales, he then did what really grates on me and had his mask on his chin! It is NOT a chin warmer!!! #TheOneShow.”

A second agreed: “@theoneshow your reporter shouldn’t have been wearing his mask under his chin!”

“#theoneshow Your reporter should not wear his mask as a chin sling. Pulling a mask up and down is bad mask etiquette and can cause infection,” added a third.

While a fourth also weighed in: “Your reporter shouldn’t have had his mask underneath his chin! That’s a big no-no! #TheOneShow.”

Moments after introducing comedian Rhod Gilbert, Amol enquired about how he’s been adapting to the new way of life.

The One Show hosts agreed as Rhod joked he was nearing 10,000 steps before Amol asked whether the comedian had spotted any rule-breakers.

“When you went on your within-the-rules walk, did you notice people sticking to the rules broadly speaking?

“Did you see people out and about breaking the rules or are people doing what they’re meant to be doing, do you think?”

Rhod hastily shut down The One Show host as he sarcastically replied back: “You asking me to dob people in live, are you?”

Amol let out a laugh before Rhod clarified he felt people were behaving “sensibly” amid rumours restrictions are going to be tightened.

BBC reporter comes under fire from The One Show fans over face mask: ‘Not a chin warmer!’