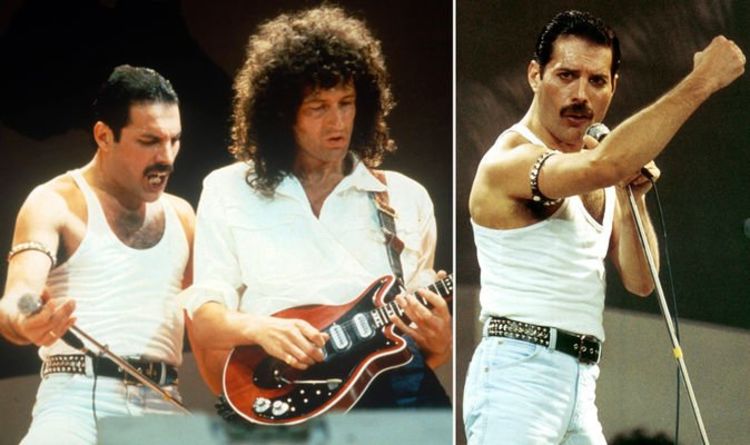 A new book released this month gives an extraordinary look at Queen from its early days in the 1970s right through to Live Aid glory on July 13, 1985. Photographer Neal Preston toured with the band for ten years and saw everything on and off stage. These days Brian May calls him “one of my oldest and best friends.” In an exclusive interview with Express Online, Neal describes what it was like being on stage with the band at Live Aid, and what Brian told him afterwards.

Neal told us: “I was the official American photographer at Live Aid I had to shoot everything that day, right from the morning royal line-up with Charles and Diana.

“I was sneaking round under the stage when Queen was about to go on and their tour manager Gerry Stickell saw me, and said ‘Get up on that stage.’ He grabbed me under the arms and almost threw me out there.

“Up until then, I hadn’t been listening to the music, just running around shooting. When I got up on that stage I felt like I was home. It was my band, my crew. I had first photographed Queen on their 1976 US tour. Now Live Aid felt like a rock show to me.”

Neal adds: “I knew it was a good set, of course,  but I was too busy getting great pictures, staying out of the way of the TV cameras and trying not to unplug equipment by mistake.

“And then it was over and I was getting ready for the next act. I had no clue what a big deal it was until I got back to the States.

“I had shot every band that day, over 95 rolls of film, but all the calls, everyone wanted pictures of Queen and the crowd with their arms out for Radio Gaga. I thought, ‘Wow, did I miss something?”

“Year later, I watched it back on Youtube and I had to ask Brian about it.”

Neal says: “You keep reading that this is the greatest set ever. This is what I thought: Freddie was tremendous, as he always was, but I’d never heard Brian, Roger and Deacy play like that. It came from somewhere up above. Brian was off the chart the way he was playing and Roger.. they were just spot on. It was unbelievable.

I mentioned it to Brian a month ago and said ‘What the hell? I’ve never ever heard you play like that and I’ve hard you play 150 times and you’re always amazing but this is like something else from above.”

His reply was typical Brian.

Neal says: “They took sound checks very, very, very seriously. They were perfectionists and still are.  And those soundchecks would turn into impromptu band meetings on stage. The sound had to be great, the lights need to be perfect, the sightlines, the venue, everything…

“The music was always way, way ahead of its time and the way they performed on stage.

“I really did learn this from them, that good is good, better is better, best is best – but there is always wiggle room to do even better.

“With Queen, bigger was always better.”