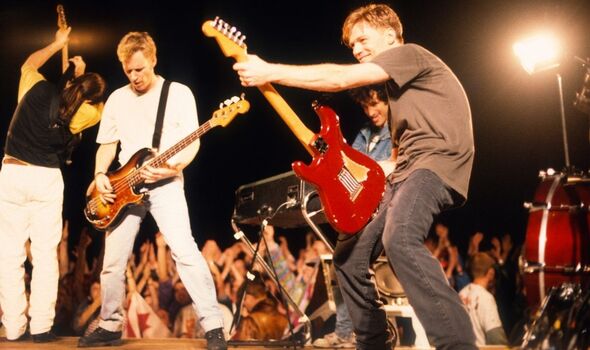 Bryan Adams appears on Sunday Brunch on Channel 4 this morning. The ‘Summer of ‘69’ singer will be joined in the studio by Al Murray, Alexander Vahos, with Franz Ferdinand providing the music. Adams, 62, is one of the best-selling artists of all time, with more than 75 million record sales to his name.

Alongside a remarkable discography that includes ‘(Everything I Do) I Do It For You’ and ‘Straight From The Heart’, Adams is a composer, record producer and photographer.

He was commissioned to photograph Queen Elizabeth II for her Golden Jubilee in 2002, and opened up on the once-in-a-lifetime assignment in a recent interview with Yahoo.

He recalled: “They called me and said, ‘Would you like to represent Canada and photograph the Queen?’

“Well, actually the original conversation was: ‘Are you free on Wednesday?’

READ MORE: Demi Rose puts on jaw-dropping display as she spills out of top

Bryan Adams on iconic photo of Queen ‘at her house’ (Image: GETTY)

Except the Queen’s house isn’t just any typical house: “So, that picture you see is actually one of the foyers of the entrance, the foyer to the garden at the back of Buckingham Palace.”

Adams was given just five minutes with Her Majesty to get the most iconic shot of his career.

The specific photo, which went on to feature on a postage stamp in his native Canada, was only down to a moment of quick thinking.

He said: “I asked her to sit there because she was about to leave, and all the photographers that work with her get five minutes.

“And as she was leaving, I said, ‘Ma’am, do you mind just sitting on the chair for a moment?’

“And there’s some Wellington boots in the corner of the picture.

“She looked over at them, and then looked back at me — and then that was the picture.”

Speaking at the unveiling of the stamp two years later, Adams said the candid snap gave a “glimpse of the real person”.

Asked why he felt it was worthy of a stamp, he said: “I think in the end, the thing that made this photo win out, was her charming smile.

Bryan Adams performing in the Netherlands in 1991. (Image: GETTY)

A year after the initial shot of Her Majesty, Adams took another portrait of the monarch and her husband Prince Philip, which is now in London’s National Portrait Gallery.

Aside from royalty, Adams has photographed celebrities all over the world, including several of his musical colleagues.

Away from his professional ventures, Adams is an animal rights activist, and has been a vegan for 33 years.

“And of course, my motto has always been if you love animals, don’t eat them.

“I’m opposed to fur and any kind of use of animal products. I don’t eat them, and I don’t wear them.

“I’m not for the killing of any creature — whether it be seals, cows, dogs, anything.

“So any time it comes to any kind of animal cruelty, I’m totally against it.

“Being sympathetic to animal rights is just something that came very naturally to me.

“But the moment I began to understand what was going on with the treatment of animals, it led me more and more in the way of the path I am [on] now, which is a complete vegan.”

Since then, he has personally intervened to protect a whale from being killed when local whalers tried to harpoon it within a conservation zone off the coast of St. Vincent and the Grenadines.

Sunday Brunch airs on Channel 4 on Sunday at 9am.

Bryan Adams on iconic photo of Queen ‘at her house’: ‘Do you mind?’