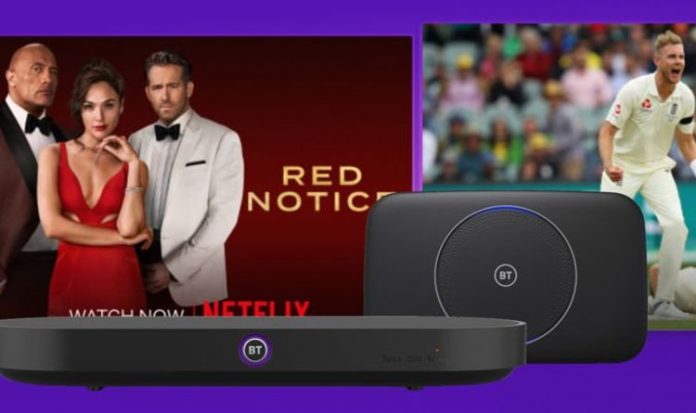 BT has slashed the prices of all of its broadband and TV packages for a limited time only. The telecoms giant has cut the prices of all of its Fibre 2 and TV bundles by £8 a month for the entirety of the plans’ 24-month contracts. For those who don’t know, Fibre 2 offers average download speeds of around 67Mbps, which is around the average home broadband speed in the UK – and should be more than enough to make a FaceTime call or stream boxsets on Netflix. Combined with the bundle of paid-for channels, this new limited time deal works out as a total saving of £192, with the money-saving deal from BT only available until midnight tonight (Thursday, December 16).

So, if you like the sound of this deal, you literally only have hours left to claim the offer.

For those who want the most affordable bundle included in this latest round of discounts, we’d point you towards the Entertainment + Fibre 2 bundle, which offers access to Netflix, exclusive Sky channels, including such as Sky Atlantic – home to the likes of Mare Of Easttown, Game Of Thrones, Little Big Lies, Succession, and more (via a NOW membership), all of the usual channels you’d get from a Freeview-compatible telly, and BT exclusive channels such as AMC.

The latter shows programmes from the renowned US studio that made unmissable hits such as Breaking Bad, Mad Men and The Walking Dead.

This plan will also help you catch up on some of the most talked-about shows from this year such as Squid Game and Succession – thanks to the bundled-in Netflix and NOW membership. This plan usually costs £56.99 per month, but until the end of today, this package is available for £48.99 per month on a 24-month contract.

While the most expensive plan is the VIP + Fibre 2 deal, which offers the full works of content available. You’ll get access to Netflix, Sky Atlantic as well as Sky Sports (both via a NOW pass), the BT exclusive AMC channel, Freeview, the BT Sport channels and Fibre 2 broadband for £105.99 per month, with the usual price £113.99.

All of the Fibre 2 deals available online right now offer 67Mbps broadband and come with free activation as well as free postage and packaging.

So you won’t need to worry about paying any additional upfront fees.

Other bundles that are available include BT Sport, BT Sport and Sky Sports or Sky Cinema and Netflix access packaged with a Fibre 2 connection. If you get one of the BT Sport packages you’ll also be able to watch exclusive live sporting events that aren’t shown on any other channel.

BT Sport is the exclusive broadcaster of the Champions League and Europa League in the UK, as well as showing the second largest number of live Premier League games. That’s not all though, with BT Sport also broadcasting the Ashes as well as the MotoGP live and exclusively in the UK.

If you pick up one of the BT packages that boasts access to Sky Sports, then you’ll be able to watch over 100 live Premier League games, as well as tune in to the next F1 season. And, after the dramatic title battle we’ve seen between Lewis Hamilton and Max Verstappen, the 2022 season (which Sky Sports will be showing exclusively live once again) is set to be unmissable too.

If you want to see all of the BT broadband and TV bundles that are available then click here.

BT deal ends today: Time running out to save £192 on your broadband and TV bill