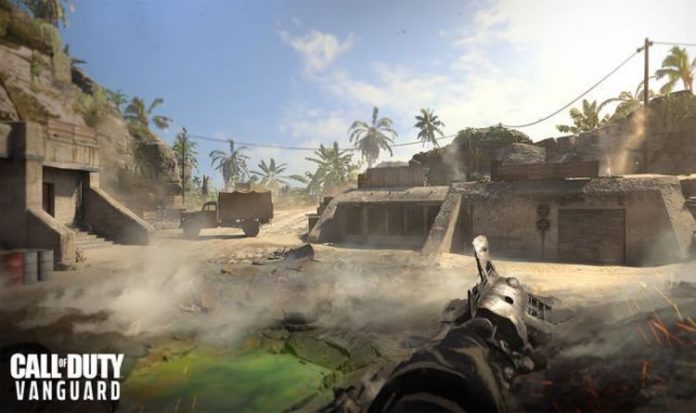 Developers Sledgehammer Games are releasing the next major patch for Call of Duty Vanguard on Tuesday, December 7.

Gamers will soon be downloading the Vanguard Season One update, a content drop that will bring new weapons, maps and zombie experiences to the WWII shooter.

From what has been shared so far, Vanguard will be updated at 5am GMT on December 7, and everyone who wants to continue playing online will need to patch their game.

The only downside is that Vanguard Season One will not kick off until later this week, alongside the new Caldera map launching for Call of Duty Warzone.

This is because Activision wants a unified launch across both games, even though there will be a delay for some gamers who don’t own Vanguard.

A message from Activision explains: “Rise on a new front and discover this secret in Season One of Call of Duty: Vanguard and Warzone Pacific, a massive island-sized introduction to another incredible year for Call of Duty — complete with free weapons, maps, Operators, and more content, especially for Vanguard owners.

“Season One will begin on December 8, following updates to Vanguard and Warzone. Vanguard’s update is scheduled for December 6 at 9 PM PT. Warzone will schedule its update for when it shuts down its servers from December 7 at 9 PM PT to December 8 at 9 AM PT to prepare for Warzone Pacific.”

Based on the information above, the Vanguard Season One release time has been set for 5pm GMT on December 8. Meanwhile, gamers who don’t own Vanguard will have to wait for 24-hours before they can start playing the new Caldera map in Warzone.

Those who just play Warzone for free will have to wait until December 9, with Activision adding today:

“Purchase Call of Duty: Vanguard before December 8 to participate in a 24-hour Caldera exclusive access event in Warzone Pacific, which begins on December 8 at 9 AM PT. Digital copies of Vanguard come with immediate access to Caldera during its 24-hour exclusivity period, while those who purchase a physical version must install and boot Vanguard and get past the initial interactive screen to gain access to this Warzone Pacific event.”

And below are some of the confirmed content drops included in today’s Vanguard update:

An American hybrid rifle with SMG-like properties, the Cooper Carbine is a short-range Assault Rifle that’s easy to control with a fast fire rate.It could best be compared to the Automaton, another popular fast-firing Assault Rifle that community members have gravitated toward since launch. By default, the Cooper Carbine has a slightly slower rate of fire, shorter effective range, and a bit more horizontal recoil, but in exchange offers better damage per shot, quicker centering speed, and a bigger default magazine.

A heavy semi-automatic rifle, the Gorenko offers the most damage per shot of any ballistics-based weapon, capable of one-shotting any enemy in Multiplayer with ease. Even though it is semiauto, follow-up shots may be hard to take due to the incredible kick its high-caliber bullets produce.

The first functional melee weapon to ever be dropped within the Battle Pass system packs a serious bite. Sewn with shark’s teeth along the club’s perimeter, the Sawtooth can whack and slice up foes just as well as the FS Fighting Knife. Consider it an alternative option to the lone Secondary Melee Weapon in Vanguard.

The Welgun finds its way into the Vanguard arsenal despite being produced in limited quantities. Similar to the Sten with the default ammo it chambers, the Welgun is extremely compact and has relatively decent balanced thanks to built-in grips. Unlock the Katana and Welgun during Season One in Vanguard or Warzone Pacific either through a challenge or within new Store Bundles, both to arrive during the season.

Radar (Launch): A reimagined version of Dome, the classic Modern Warfare 3 map. This small radar station in the Pacific is built for fast-paced combat. Remember to not camp on the catwalks!

Best known as a popular third mode in competitive Call of Duty, Control will see a return in Vanguard Multiplayer in the launch window of Season One.