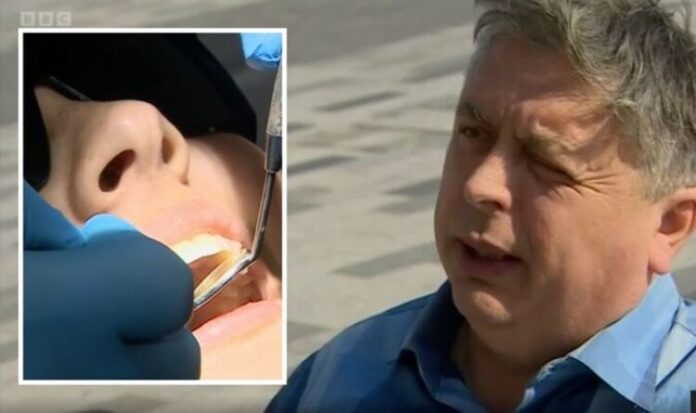 During a dedicated segment on BBC Breakfast, many locals shared their worries over their deteriorating oral health and how they have to travel further afield to try and get an appointment. A report by the British Dental Association revealed that 40 million appointments were missed due to the pandemic and lockdowns, with many practices struggling to reopen to full capacity to meet their targets.

Hosts Roger Johnson and Rachel Burden started the segment by spotlighting the mass backlog of dental appointments in the UK.

Rachel said: “The British Dental Association is warned that some will be forced out of business as treatments become financially unviable.”

Roger added: “Yes, 40 million NHS dental appointments have been lost since lockdown but with staff shortages and funding cuts hitting the sector, many are worried they will be unable to meet their government targets and that will mean they won’t receive financial support.”

Reporter Stuart Whincup went out on location to showcase the dire situation in the North East.

The correspondent spoke to both dental professionals and residents to see how the pandemic had impacted the area.

One resident candidly said: “There is a lot of people I know that certainly cannot get an NHS listing whatsoever.

“You can tell from the state of their teeth just how bad it is, really.”

With waiting lists growing, many patients have to either go private or attempt their own procedures.

“Treating gum disease, you lose money. If we are not funded properly, we can’t do the job.

“And to be honest, we just can’t do it anymore. It’s destroying us.”

In January this year, the government announced £50 million in funding to pay for 350,000 extra dental appointments but local Member of Parliament Matt Vickers felt more needed to be done.