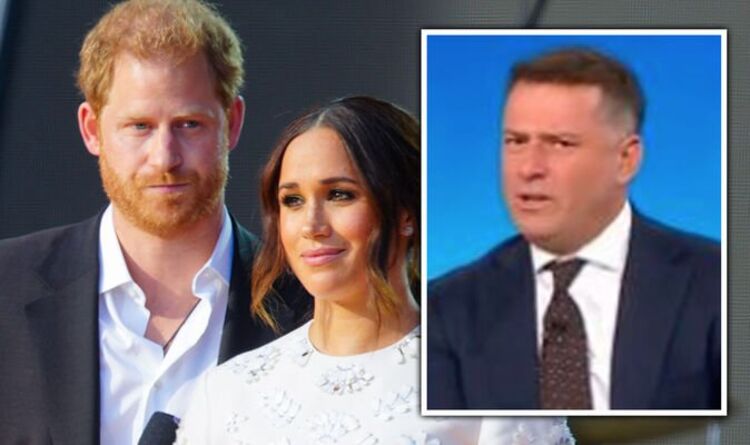 The Today Show presenters Karl Stefanovic and Alison Langdon spoke to royal expert Russell Myers about the Duke and Duchess of Sussex. The Royal Editor for Lorraine and The Mirror revealed the couple will be travelling with a private security team but will also take advantage of Dutch authorities during their trip.

Russell explained: “He skipped Prince Philip’s memorial as we well know and the rest of the Royal Family were there.

“There were royals from all over Europe at Westminster Abbey for Prince Philip’s memorial and still Harry and Megan couldn’t be bothered to turn up. It’s frankly ridiculous.”

Allison quipped: “It’s getting harder and harder to defend them.”

“I can’t even look at them,” Karl remarked and Alison added: “And you used to love Harry.”

Read more: ‘No appetite for Meghan to come back’ Royal expert says

“So they employ private bodyguards but their argument is when they come to the UK as a family they should have Met police protection.

“But we still can’t quite work out why he couldn’t come to the memorial because the entire event was enveloped by the Met police. They would have been a part of the royal major eventing police operation that that was.”

“If [Meghan] goes to the Invictus Games, of course, they are entitled to go wherever they like whenever they like, they are no longer members of the Royal Family and she’ll be there supporting him charitably.

“But it sort of suggests there’s no appetite for Meghan to come back to Britain and maybe some people would say, ‘I wouldn’t blame her’.

The Today Show airs on Australia’s Channel 9 on weekdays from 5.30am.