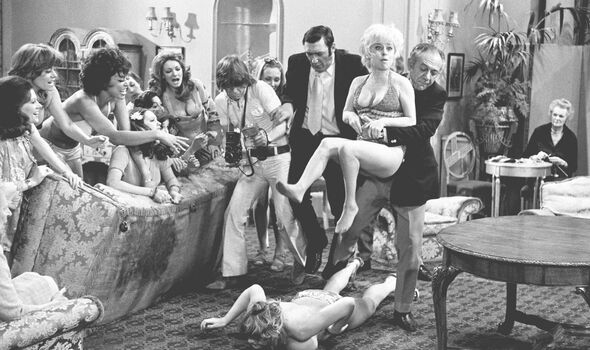 Across the Bank Holiday weekend, ITV3 are showing 21 of the most iconic films from the Carry On series. Today, the channel airs six Carry On classics including ‘Carry On Cleo, ‘Carry On Again Doctor’ and ‘Carry On Abroad’, with the latter airing at 8:15pm this evening. The comedy, the 24th release in the series of 31 Carry On films, features Sid James, Dame Barabara Windsor and Kenneth Williams among a host of other big names.

It tells the story of a package holiday turning into a whirlwind adventure in the Spanish resort of Elsbels.

The Carry On crew soon find that the Palace Hotel does not live up to its name, not least because the hotel still hasn’t finished being built, and the weather is appalling.

The Carry On series drew on a regular ensemble of actors that included Joan Sims, Kenneth Connor as well as Sid and Barbara.

There had long been speculation that Sid and Barbara had embarked on an affair while making the iconic films, something that was eventually confirmed by the EastEnders actress in her 2001 memoir.

READ MORE: Dolly Parton’s devastation at turning Elvis down ‘I cried all night’

Barbara and Sid famously embarked on an affair. (Image: ITV)

Barbara revealed the true extent of their affair in her book, including how he seduced her with a passionfruit.

She wrote: “I’d heard nothing of Sid’s reputation as a ladies’ man when we’d just filmed a scene for Carry On Henry and Sid handed me what looked like a prune.

“I’ve bought you a present,” he explained, before sticking his tongue into the passion fruit and licking it, slowly and suggestively.

“Next we were at dinner while working on the show Carry on London, when he whispered: ‘Do you know something, Barbara, they’re not as big as they look on screen – your bosoms.’

Barbara and Sid were two of the mainstays of the Carry On series. (Image: GETTY)

Barbara continued: “Months later the inevitable happened one night after dinner – and he said: ‘Oh, Barbara, I wish you were seeing me as I used to be.’ Sid was crazily, madly, in love with me.

“When it ended he told me he would last only one year without me. Sixteen months later he died.”

Barbara wrote she had initially been apprehensive about Sid, who was 24 years her senior.

Barbara and Sid were both married when they had the affair. (Image: ITV)

She said: “He obviously thought I was this raving sexy little thing and I thought if I did the dirty deed he’d leave me alone.”

He would send Barbara a dozen red roses with a note attached with the words “Love Rome”, and arranged to see her in Australia during her Carry On Barbara show, as he could not face the thought of being without her.

She recalled Sid would also rather embarrassingly confess his love for her in public and to her friends.

Barbara Windsor and Sid James on one of the Carry On sets. (Image: Mirrorpix)

The affair, however, began to affect Barbara’s mental health, so she called it off.

A heartbroken Sid turned to drink after becoming depressed, and died soon after from a heart attack.

Sid died on stage in Sunderland during the first act of The Mating Season on April 26, 1976.

Starring alongside him was fellow South Africa actress Olga Lowe, who had initially believed he was joking when he failed to answer her lines.

She said: “I came on, said my first lines and he answered as normal.

“Then I sat on the sofa with him. I said my next line and he didn’t answer.

“His head had slumped and his eyes had gone back into his head.

“I thought it was a gag. Well, you would with Sid. He was such a rascal.”

Eventually, it became clear that all was not well and the curtain swiftly came down as medical teams rushed to Sid’s attention.

Olga added: “The doctor called the ambulance and I believe he died on the way to hospital. It was awful.”

Barbara wrote of the pain she felt when Sid died: “I sat in my front room and sobbed my heart out until my eyes stung and my throat ached.”

Watch the Carry On marathon on ITV3 this Bank Holiday weekend.

Barbara Windsor’s memoir, ‘All of Me: My Extraordinary Life’ is available here.

Eventually, it became clear that all was not well and the curtain swiftly came down as medical teams rushed to Sid’s attention.

Olga added: “The doctor called the ambulance and I believe he died on the way to hospital. It was awful.”

Barbara wrote of the pain she felt when Sid died: “I sat in my front room and sobbed my heart out until my eyes stung and my throat ached.”

Watch the Carry On marathon on ITV3 this Bank Holiday weekend.

Barbara Windsor’s memoir, ‘All of Me: My Extraordinary Life’ is available here.

Carry On: Sid James seduced Barbara Windsor with a passionfruit