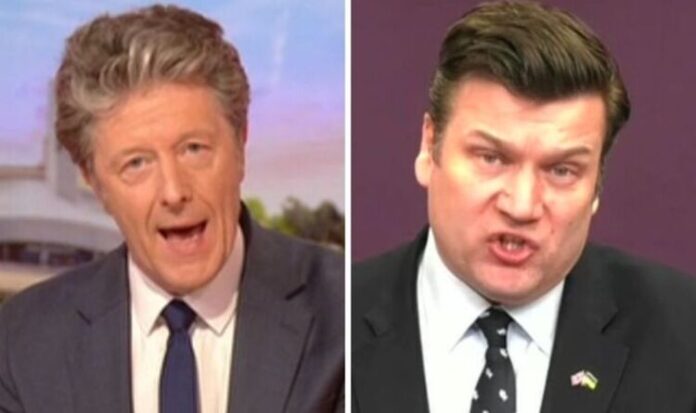 The Armed Forces Minister spoke with Charlie Stayt about how the UK is helping the Ukrainian army as Russia continues to invade the country. The BBC Breakfast host put the MP on the spot as he asked what was holding up the UK sending weapons over to help them. The discussion also got heated when Stayt grilled Heappey about the refugee crisis and why they were making it difficult for women and children to enter the country.

Stayt began by asking Heappey about the recent death toll in Ukraine and whether the Russian army will be held accountable.

“What has to happen before the UK and before we do more than we’re doing now?” the host quizzed.

“I know there is a huge debate around the restrictions you feel because of NATOs involvement, but you’ll be well aware not just listening to what people are saying that people are finding it hard to stomach what they’re witnessing.”

“Of course they are, this is horrible,” Heappey agreed before branding the war “stomach-churning”.

“We are doing everything we can do in terms of sending weapons to the International Ukrainian community,” he continued.

“We have had success with the anti-tank weapons we provided have haltered Russians in advance towards Kyiv.”

He went on to add: “What we are now looking at is the feasibility of sending things like UK high-velocity missiles that can be used at night so that the Ukrainians can close their skies at night.

“Unfortunately, so much of what we are seeing is destruction caused by artillery and missile systems and the challenge there is an awful lot of this stuff is still in Russia.”

Heappey stepped in to defend his previous statement as he hit back: “When I say we are looking at, I mean as the Defence Secretary announced to the Commons yesterday is it is our intent to do this.

“But there are some practicalities of how you train those who will use what will be a brand-new  weapon system.”

Following the segment, viewers took to social media to share their thoughts, with many slamming Stayt for his interview technique.

@iMultitudes said: “Charlie virtue signalling about refugees. This isn’t questioning, this is trying to set an agenda. #BBCBreakfast.” (sic)

Vera raged: “Charlie is off his rocker… he did not say women and children are dangerous at all…” (sic)

While Champions Bar added: “Charlie if you are running out of time, ask shorter questions!!!”

Diane said: “Let’s leave everything to Charlie Stayt, shall we? Not. #BBCBreakfast.”

Charlie Stayt erupts at Heappey over supply of weapons to Ukraine ‘What’s the hold up?’