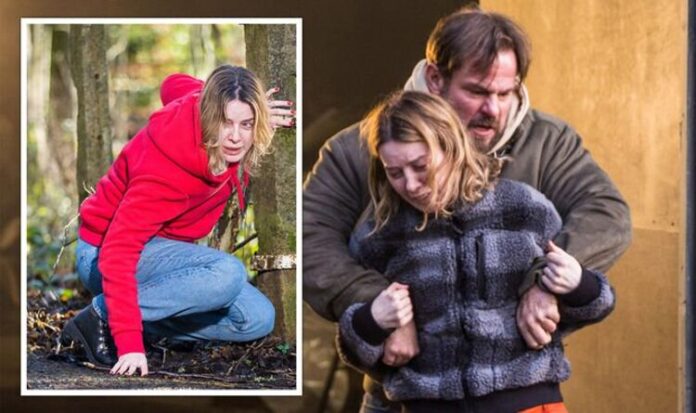 Abi Franklin (played by Sally Carman) is set to be left feeling devastated when Kevin Webster (Michael Le Vell) rejects her again. In upcoming scenes on Coronation Street, Abi gives in to her addictions and when Kevin returns from holiday he discovers her high on drugs and alcohol with her drug-buddy Dean Turnbull. However, Abi has no idea just how dangerous Dean really is.

In scenes yet to air on the ITV soap, Abi orders more drugs as she finds it difficult to come to terms with her late son Seb Franklin’s (Harry Visinoni) birthday.

However, when Kevin returns from his holiday he is furious to find Abi and Dean high on the sofa.

The Coronation Street stalwart was hoping to patch things up with Abi, so he is understandably left disappointed to find her using drugs.

He orders Abi and Dean to get out of his house, but while Abi is packing her belongings Dean steals Kevin’s garage keys.

When he soon sees Abi with a bag of alcohol, he suggests she had something to do with the theft.

He tells her if the garage does not retrieve the stolen car, the business is finished.

After spotting a BMW, Abi forms a plan to get the stolen car back in the garage and calls up Dean.

When Dean agrees to meet her to inspect the BMW, Abi calls the police to report the original stolen car.

However, when Dean overhears her on the phone to the police it looks like she is in grave danger.

Meanwhile, Toyah Battersby (Georgia Taylor) tries to call Abi when she learns about the stolen car from Tyrone.