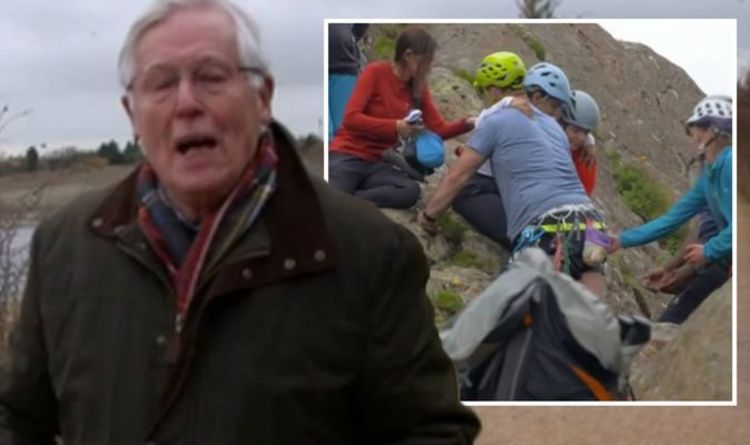 John Craven was the Countryfile host tasked with hosting the Review of the Year special of the BBC show on January 2. And there was a recurring theme throughout as John spoke with the younger generation who’ve taken part in segments for the nature show over the past 12 months. However, when he caught up with guest Alishba, the Countryfile contributor revealed the extent of an injury she sustained during filming.

Alishba and fellow teens Sahr, Harrison, Tyrone joined Dwayne Fields in 2021 as he prepared them for an expedition up Mount Snowdon.

The four youngsters were outdoor enthusiasts from the city who hadn’t had the chance to get to grips with nature beyond.

Alishba said at the time: “I’ve never camped before because I’ve never had the opportunity, especially being from an Asian background.

“It’s not something you do every day and I’m actually trying to train in the outdoors.”

In 2021, Dwayne took it upon himself to get the teens used to the terrain outside the city, taking them hiking, rock climbing and abseiling in preparation for the Snowdon climb.

However, during a hike, Dwayne revealed disaster had struck Alishba.

He said in the pre-recorded clip: “But there’s real drama too, just a few moments later away from the cameras, Alishba has hurt her leg bouldering.

“It looks bad so we need to get her downhill to safety. I’m gutted for her. This is something none of us wanted to see.”

Explaining the specifics, she added: “There was like two breaks, there was a big one and a slightly smaller so yeah, they told me I’d broken it and I was in shock because I’d never broken anything before.”

However, it hasn’t dampened Alishba’s spirits as she concluded: “It’s definitely not put me off because recently, I was in Scotland and we did a week of skills, mountain skills – indoor rock climbing, outdoor rock climbing – this is what I want to do.

“It’s something I’m absolutely passionate about, I love it.

“And that’s why I also wanted to pass that same feeling onwards.”

Alishba has even got her family involved as she said: “Even I’ve introduced it to my family and we go on walks and we went on camp together and it was the first camp we’d been on in however many years.

“I just feel like the outdoors is an amazing way to express yourself.”

“Not even a broken ankle has stopped her.”

Countryfile continues Sundays on BBC One.