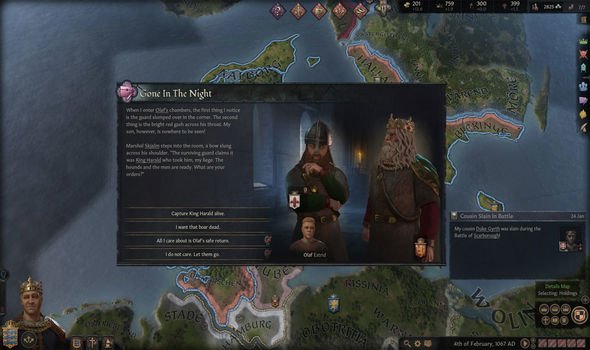 While things may have changed and made easier to understand, Crusader Kings 3 remains an addictive family management sim offering plenty of drama and game time.

For those returning to the CK franchise, you know the chaos that awaits you, with plots, coups and plenty of murdering intent brimming under the surface.

Set in the Middle Ages, CK3 takes what its predecessors were famous for and makes it as accessible as possible.

This doesn’t mean things have been dumbed down or made easier, with the game’s many systems and informational trees still mostly intact.

Many have been streamlined and improved, making for a less baffling experience.

Having so many different systems and stats in place is what makes Crusader Kings 3 such a great game, as well as justifying the sheer size of the world, and making its people a joy to interact with.

There is a lot to learn, and you’ll probably miss quite a lot on your first playthrough, but the good news is that while gameplay can complex and nuanced, it also works and stitches together grand narratives.

And while veterans may find it sparse of content when compared to other games in the franchise, there is still plenty to do and lots of intrigues to get immersed in.

The good news is that newcomers to the series will find things much easier to learn, with a good tutorial allowing you to explore the game, without ruining the many little secrets it holds.

This sets you up in 1066 at the helm of House Brian of the dal gCais dynasty, with Petty King Murchad Mac Donnchad calling the shots.

This is your character, and when he dies, his heir will take over, becoming your next playable King, or lord, depending on how good a job you do.

The goal of the tutorial is to get started on becoming the High King of Ireland, something that’s reasonably easy.

But even though your world will be dominated by the counties in your area, the world will continue to change around you.

Zooming away from Thurmond will provide you with a look at the many countries and Empires that are in place.

CK3 is a vast place, and like Crusader Kings 3, is filled with characters with their own stories and terrible secrets.

Crusader Kings 3 is a great “What If?” simulator, with the different webs of information creating pure chaos with the history we know.

While I was looking to dominate my fellow Petty Kings in Ireland, the Duke of Normandy failed in his attempts to secure the throne of England.

Decades of fighting ensued between three Scandinavian dynasties, leaving William in France and England split between Norway and Denmark.

Wales was soon sucked into the cauldron of intrigue, while Scotland managed to unite, providing a small, feisty, counter-weight.

Meanwhile, I manage to get my first ruler onto the Irish throne without pulling any outside powers in.

To achieve this goal, I had to use the many different systems and currencies in play to help win over or conquer my neighbours.

Ireland is chosen as the tutorial as the country is disunited and is an excellent place to learn the ropes of building an empire.

This can be achieved by warring with your rivals until you have enough land to proclaim yourself High King.

Or, you can use the other systems in place to make your ascent, albeit, in the shadows.

If you can score the right marriage alliances, you can use your allies to gang up on others and slowly build your vassal numbers.

Another option would be to find a relative of a powerful rival you can marry, who has a claim to the land you want.

By setting up a murder plot against the current incumbent and his lone heir, perhaps you can pop your queen onto the throne and enrich those who come after you?

The most straightforward way to become High King is by using your council to forge claims on other regions, giving you a Casus Belli.

This gives you an easy route to increase your holdings, but will also mean spending gold to keep your armies in the field, as well as other in-game currencies.

The main four are Gold, Prestige, Piety and Renown, all of which builds up over time while your character is alive.

You can boost these numbers in different ways, using things like marriages, wars and pilgrimages to build your reserves.

Declaring war on a neighbour could mean spending Prestige, which is a measure of how famous you are.

By cashing this in you may win another holding and help boost your levies and monthly tax income.

The downside is that it may make negotiating with other characters harder, leaving you unable to complete a marriage proposal, or sway a rival.

Each system has its own worth and will help you in different ways, depending on how you decide to play your game.

Ireland is a realm ripe for conquest, and you can make sure you’re at the top. But the world of Crusader Kings is a big place, and you can play as hundreds of different lords and kings.

While it’s fun to forge your own kingdom and power, you might also like trying to maintain the strength of an already established family.

You could take control of the Capets and make it your life’s work to undermine and dismantle the Holy Roman Empire (good luck with that).

You may not want to be the top dog and perhaps would prefer to build your own power as an important Duke or Baron.

All of these options are open to you, with the map expanding far away from Europe to all kinds of different locations.

One of my favourite things about Crusader Kings 3 is just how random the world can be when things get rolling.

A great way to experience this is by saving your game before a big event and playing through a year, before reloading and doing it again.

You will see just how many different ways things can play out, and it will lead you down some very surprising paths.

This is all helped along by the many characters you will meet and probably, murder, along the way.

Crusader Kings 3 is powered by its characters, most of which are shaped by what happens around them.

Each person starts building up characteristics and traits from the time they are born, and these will change how they react to the world around them.

An injury in childhood could leave someone with one-eye, a trait that will make them scarier to look at but unlikely to be handsome.

Each trait will feed various stats found in the game, all of which add up for you, and against you.

Parents pass on congenital traits to their children, which makes finding the right partner even harder.

That powerful alliance that can win you that succession civil war could be right in your hands, but the negative traits that could be passed onto your child may put you off.

Characters will also be shaped by their lifestyles, another system in which you can unlock different traits and bonuses, much like you would find in an RPG.

You build up points towards one of the different stats you can fill, such as marshall prowess, or Stewardship, by performing tasks, or by random events.

You may find yourself in the middle of a murder plot and have different options, each one giving you a slightly different outcome.

Sometimes these can be gambles, offering you a percentage on what positive or negative could happen.

With the many different scenarios CK3 can throw at you, it’s easy to make an incredibly compelling narrative with you at the centre.

One issue that Irish dynasties have is that they have equal partition successions, laws, meaning that the kids get an equal share.

You want to enrich your family and make all the different branches strong, but perhaps it would be better to do that further in the future when you have more to give.

Everything action you make in CK has a consequence, and it’s all about whether you’re willing to pay the price.

I decided to lock up one of my sons to avoid the issue and have one sole heir take everything I had built.

Having put him in a pretty horrible dungeon, I was eventually forced to execute him, just to make sure.

I was getting on in years, and the damage I had already done to family relation may prove terminal between the surviving siblings.

Performing such acts made me a Tyrant, and meant that many of my most powerful vassals suddenly didn’t like me.

They formed a faction to undermine my grasp on power and were growing in a way that could cause issues down the line.

Obviously, the best thing to do was to fabricate a few secrets to blackmail some of them to stop their intrigues.

I was also able to remove some from their titles and dish them out to some ib my family who wasn’t so upset.

As Merchad was preparing to leave the scene, Ireland was firmly in his hands, and his sons would inherit important places in Scotland.

And with four hundred years of history to smash through, and a huge number of family members to shape, what more could a weird history fan want?

Crusader Kings 3 remains an incredibly in-depth experience that allows you to forge your own destiny using an almost exhausting number of tools.

The hidden depths to this title and the ways you can combine different systems makes it a great way to while away the hours.

You may not be able to experience everything in one playthrough, but luckily, there are so many options at hand, there’s no reason to not start from the beginning, and mould a new family of monsters.