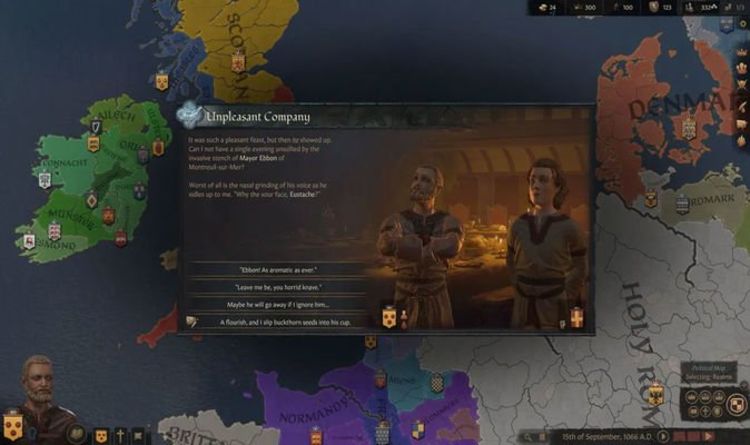 Crusader Kings 3 has been out for over a month now and the game’s first big patch is being released this week.

The good news is that we know about everything that is being changed as part of Crusader Kings 3 update 1.1.

The downside is that it’s such a huge list, you might end up missing a few tweaks a long the way.

Paradox has confirmed that CK3 1.1 will be launched on Tuesday, September 29, 2020, but have not provided an exact release time.

While we don’t know exactly when everything will be kicking off, we do know a lot about the new release.

A message from Paradox adds: “Tomorrow is the day when patch 1.1 will drop, and we’re very excited to share it with you!

“We’ve made a variety of UI improvements, fixed a whole bunch of bugs, and addressed many common issues players have run into. Using the standard Paradox unit of measurement, the changelog comes in at 5.3 @Groogy in length.”

Full Crusader Kings 3 patch notes have been shared and they confirm a massive list of bug fixes and UI improvements.

Among the many changes coming to the game, fans will be pleased to hear that “Sneaky people will now wear sneaky clothes,” and “Sick characters now dress the part.”

Much of the new update is made up of CK3 fan feedback, including a lot of bug fixes being worked on.

But the development team are looking to remove certain ways of playing the game, including changing the rules on how Domains work.

As confirmed in the new patch notes, “The maximum penalty for being over your domain limit is now -100% taxes/levies, increased from -90%.

“If you vastly exceed your Domain Limit for more than one year (the grace period for new inheritances/conquests), all buildings will deactivate until your domain limit is lowered.”

As mentioned above, the Crusader Kings 3 patch notes are lengthy and highlights from them can be found below:

PS Plus vs Games with Gold November 2020: One-sided victory in...