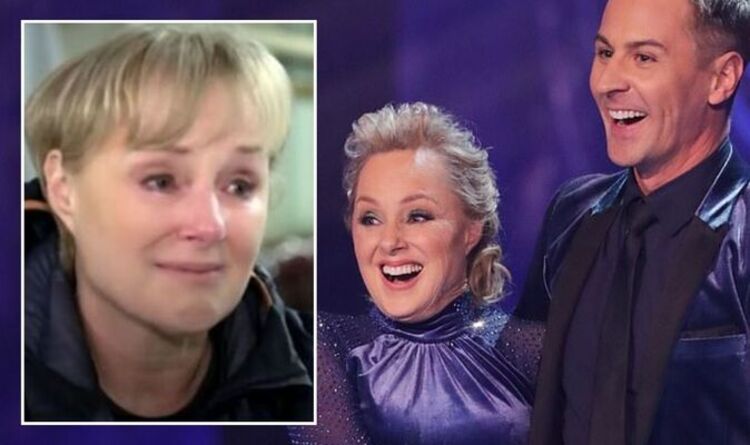 Dancing on Ice star Sally Dynevor, who plays Weatherfield stalwart Sally Metcalfe in Coronation Street, will be taking to the ice on Sunday night beside her legendary skate partner Matt Evers. The soap veteran, who has credited her husband Tim Dyenvor and their children for giving her the courage to step out of her comfort zone, could be the next celebrity to get the boot according to the bookmakers at Ladbrokes.

Sally Dynevor will head into tonight’s Dancing on Ice as the favourite with Ladbrokes for the boot.

The Corrie star is this series’ rank outsider at 50-1 to be crowned winner, but a week five exit seems much more likely at 13/8, with Kye Whyte and Stef Reid 3-1 apiece.

Alex Apati of Ladbrokes said: “Corrie’s Sally Dynevor is skating on thin ice as far as the odds are concerned, and a swift return to the cobbles could well be on the cards.”

Fourth down the list of potential evictees is Happy Mondays star Bez at 11-2, the accident-prone Mancunian has proven to be a hit with ITV audiences and the bookies have placed him in a comfortable spot, trailing behind his co-stars.

In week one, Bez descended into the rink on a pair of giant maracas, scoring only 12.5 for his performance but the star hit a personal best last weekend with 20 points as he took on a Highland Fling skating to The Proclaimers classic I’m On My Way.

Further down at 13-2 is former Love Islander Liberty Poole, the glamorous blonde who performed to Vogue, Madonna’s 1990 single.

She confessed to partner Joe Johnson that she had never heard the iconic hit before her routine over the weekend.

Liberty made the admission when Joe played the song for the first time during rehearsals but the TV star claimed it was not familiar.

Elsewhere, at the other end of the scale, Regan Gascoigne is an even-money shot with the bookies to go all the way this year, putting him streets ahead of the chasing pack at the head of the betting.

Regan’s dad, Paul Gascoigne, may be one of the best-known footballers in the country, but the 25-year-old dancer is really starting to make a name for himself on the ITV show.

The skating contestant has been impressing judges and viewers with his spectacular performances on Dancing on Ice and bookmarkers are predicting he could take victory in this year’s line-up.

Not backing down without a fight is Pussycat Dolls member Kimberly Wyatt with a highly respectable 11-4.

The former singer has continued to impress judges but bookies have predicted she won’t be taking the reins with 11-4 chances in the final race.

Former Strictly Come Dancing star Brendan Cole will be taking the third spot at odds of 9-2, but could this prediction be good enough for the competitive dancer?

Brendan was left emotional after judge Christopher Dean branded his opening skate as “the best first performance” he’d seen during his stint on the hit ITV show.

After the scores had been announced, hosts Phillip Schofield and Holly Willoughby quizzed the judging panel on their decision to score the pair an impressive 30.5 out of 40.

Christopher told ITV viewers: “Okay, that was the best first performance I’ve ever seen by a celebrity in all 14 series.”

But for 25-year-old Connor Ball, the singer will also try his luck at winning with odds of 8-1.

Connor is best known for being part of the pop-rock group The Vamps, which got together in 2012.

After taking a nasty tumble last week, judges were impressed by his resilience after he gave it his all during the live show.

Dancing on Ice airs Sunday on ITV at 6pm