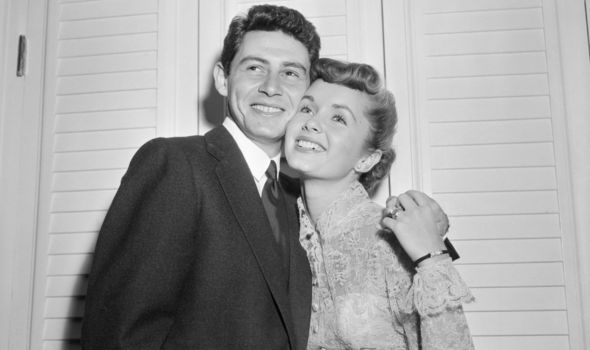 Today marks the fifth anniversary of Debbie Reynolds’ death. She and her daughter Carrie Fisher, best known for her role as Princess Leia in the Star Wars films, died within a day of each other at the end of December five years ago. Born in Texas, Debbie began her film career at MGM aged just 16, and got her big break just two years later. At just 18, she was handed arguably her most famous role — co-starring alongside Gene Kelly in ‘Singin’ In The Rain’.

Despite not being a dancer, she proved herself to be a fast learner and was catapulted into the Hollywood spotlight.

With its remarkable dance performances, music, and comedy, the film is widely considered the ultimate Hollywood musical.

Debbie opened up on the experience of making the film in her 2013 memoir ‘Unsinkable’, which suggested the making of the film was not as wonderful as it might have seemed on the surface.

Her co-star Gene Kelly was a professional dancer, and had been classically trained in ballet.

Debbie, in stark contrast, was a newcomer and unwanted by one of the biggest names in Hollywood.

Debbie Reynolds starred alongside Gene Kelly in the film ‘Singin In The Rain’ (Image: GETTY)

Debbie wrote: “Gene definitely hadn’t wanted me as his co-star. But Louis B. Mayer [the co-founder of MGM] had chosen me to play Kathey Selden, and there was nothing Gene could do about it, even though he was MGM’s biggest star at the time.”

Gene could be difficult to work with, Debbie wrote. She explained: “He came to rehearsals and criticised everything I did and never gave me a word of encouragement.

“He was a severe taskmaster.”

Gene and Debbie play two people falling in love in Singin’ In The Rain.

Debbie and Gene in Singin’ In The Rain. (Image: GETTY)

Debbie later admitted her discomfort at the scene, claiming in Unthinkable: “The camera closed in.

“Gene took me tightly in his arms… and shoved his tongue down my throat.

“‘Eew! What was that?’ I screeched, breaking free of his grasp and spitting.

“I ran around frantic, yelling for some Coca-Cola to cleanse my mouth.

“It was the early Fifties, and I was an innocent kid who had never been French-kissed.

DON’T MISS:
James Stewart wanted to quit acting before It’s a Wonderful Life [INSIGHT]
Elvis Presley opened up to defend his religion – ‘I wish’ [QUOTES]
‘Nothing to do with The Beatles’ Lennon on McCartney’s tribute track [QUOTES]

Debbie admitted she was ‘stunned’ by the kiss. (Image: GETTY)

“It felt like an assault. I was stunned that this 39-year-old man would do this to me.”

Filming many of the scenes was gruelling work.

The now iconic ‘Good Morning’ scene, a four-minute song and dance number with all three of the main stars — Gene, Debbie and Donald O’Connor — took a staggering 15 hours to get right.

Debbie’s feet were bloodied at the end, and doctors ordered she took two days to rest in bed.

She once tucked into one of MGM’s rehearsal rooms during dance practice, and sat beneath a piano in tears.

She was comforted by legendary dancer Fred Astaire. Then in his early fifties, he told her: “You’re not going to die.

“That’s what it’s like to learn to dance. If you’re not sweating, you’re not doing it right.”

Though Debbie and Gene did not always see eye to eye in the making of the film, she later reflected on their relationship with affection.

In an archived report in the Sydney Morning Herald in 1996, she called Gene a “great dancer” and a “cinematic genius”.

She added: “He made me a star. I was 18 and he taught me how to dance and how to work and be dedicated.”

Years later, Gene came to see Debbie’s first appearance on Broadway, something she reflected on gleefully.

Writing in Unthinkable, she said: “In the early Seventies, Gene came to see me when I was starring in ‘Irene’, my first time ever on Broadway.

“After the show, he came backstage, hugged me, told me how proud he was of me, and kissed me — no tongue.

Gene too, admitted regret at the way his and Debbie’s relationship started. He later admitted: “I wasn’t very nice to Debbie. I’m surprised she still speaks to me.”