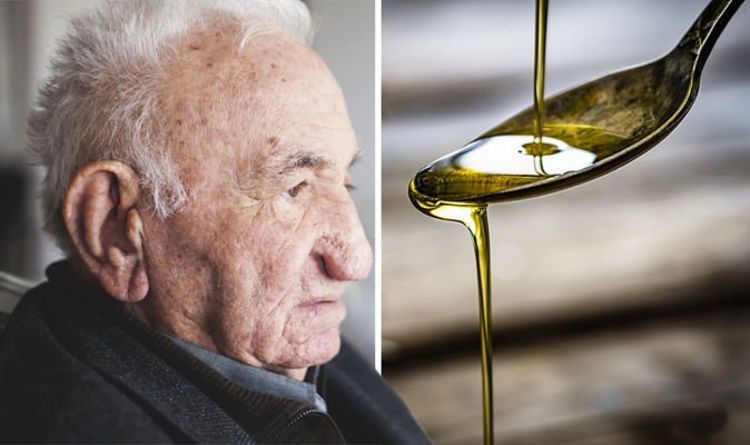 Dementia is a dire condition that wreaks havoc on the lives of millions annually. The onset of symptoms is progressive and upsetting, generally characterised by a gradual decline in mental agility. Until recently, a paucity of research had explored the association between specific dietary patterns and the risk of the disease. One body of research, however, suggested that an oil widely used in cooking, could harm brain cells and heighten the risk of mental decline.

According to one study, a fatty acid found in a host of seemingly healthy ingredients could raise the risk of Alzheimer’s disease by harming brain cells.

The study, led by the Gladstone Institute of Neurological Diseases, found that high levels of arachidonic acid, an Omega 6 fatty acid, was linked to brain changes commonly found in individuals with Alzheimer’s disease.

READ MORE: Dementia signs: The behaviour that is an ‘early warning’ – it can be ‘very subtle’

The researchers measured the levels of arachidonic acid in the brains of mice, before giving them a memory test called the Morris water maze.

Rene Sanches-Mejia, who led the study in San Francisco, noted: “The most striking change we discovered in the Alzheimer’s mice was an increase in arachidonic acid and related metabolites in the hippocampus, a memory centre that is affected early and severely by Alzheimer’s disease.”

Arachidonic acid plays a key role in the production of the blood-brain barrier, a membrane that mimics a filter and protects the neurons from potentially dangerous contaminants in the bloodstream.

The findings, published in Nature Neuroscience, suggested that too much arachidonic acid could be harmful to the brain.

Scientists found that blocking the enzyme appeared to lower levels of arachidonic acid chemicals in the rodent’s brains, preventing memory and behavioural decline.

While findings highlight a possible link between omega-6 and Alzheimer’s disease, other omega fatty acids may have the opposite effect on the brain.

Fatty acids such as omega-3, for instance, may protect the brain against cognitive decline.

Research published in the journal Brain Behaviour and Immunity last year highlighted the protective effect of omega-3 in rats who ate processed foods.

What’s more, in rodents who ate processed foods, the team found evidence of rapid brain decline that occurred in the short space of four weeks.

Ruth Barrientos, an investigator in the Ohio State University Institute for Behavioural Medicine Research, said: “These findings indicate that consumption of a processed diet can produce significant and abrupt memory deficits – and in the ageing population, rapid memory decline has a greater likelihood of progressing into neurodegenerative diseases such as Alzheimer’s disease.

“By being aware of this, maybe we can limit processed foods in our diets and increase consumption of foods that are rich in the omega-3 fatty acid DHA to either prevent or slow that progression.”

Omicron variant: The ‘mild to moderate’ symptoms ‘despite’ getting booster jab – Lancet

Covid vaccine: When should you take paracetamol – before or after the jab?

How to live longer: How far you should walk every day...

Heart attack: How to prevent the condition – the factors that...