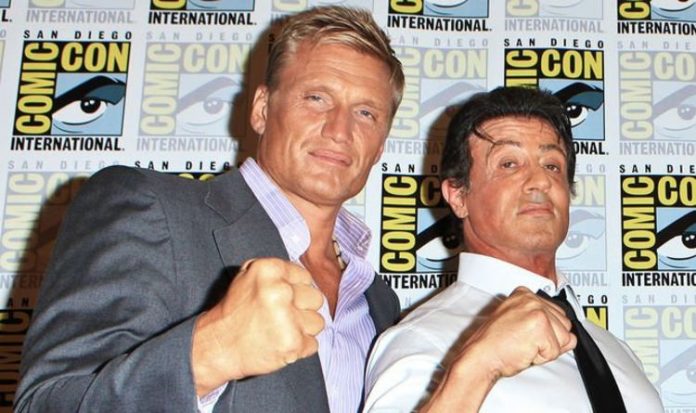 Stallone has previously told the story that his co-star hit him so hard that he was hospitalised. The action star said: “He pulverized me and I did not feel it at that moment but later that night my heart started to swell. He had bruised the pericardial sac, which is when the heart hits the chest – like in a car accident when your chest hits the steering wheel. My blood pressure went up to 260. They thought I was going to be talking to angels…Next thing I know, I’m on a low-altitude plane to the emergency room, and I’m in intensive care for four days. And there are all these nuns around.”

Stallone confessed he had actually known he was in trouble the first time he saw Lundgren: “I had to find a superhuman being as an opponent, someone who would be overwhelming… And then Dolph Lundgren walked in, and I hated him immediately…  This is what I would imagine they would create as an athlete — someone who is literally perfect. Indestructible. Shoulders, calves, forearms, giant butt, neck, back, everything.”

Lundgren played Rambo’s new Russian rival, Ivan Drago. The Swedish former bodyguard and martial arts expert was 11 years younger than his US co-star and towered over him by 20 centimetres.

And Stallone himself previously admitted he provoked the dangerous situation that put him on stretcher:

Lundgren said: “We shot those 15 rounds over two or three weeks, eight or 12 hours a day, so you’re throwing thousands of punches. If you don’t connect, it looks a bit fake, but it doesn’t mean you want to hurt the other guy. But there were no hard feelings.”

But did he really out Stallone is hospital or not? The Swedish star added: “I don’t know. He keeps talking about it, so maybe he’s right.

“He did go to the hospital, but I don’t know whether it was my punches or the fact that he was so overworked as the director, actor and writer.”

The 64-year-old actor also clarified that Stallone may have “hated” how physically impressive Lundgren was, but he also used every trick as a director to make him look even bigger.

Lundgren told fans in the Guardian Q&A: “I am taller than him, so it’s all about camera angles. A lot of times, they put me on a box. When I come into the press conference in my uniform, I have lifts in my shoes.

“Stallone was clever to exaggerate the difference. Less talented actors would try to make themselves look bigger against the other guy, but he knew that, by building up the opponent, it made him look better at the end.”