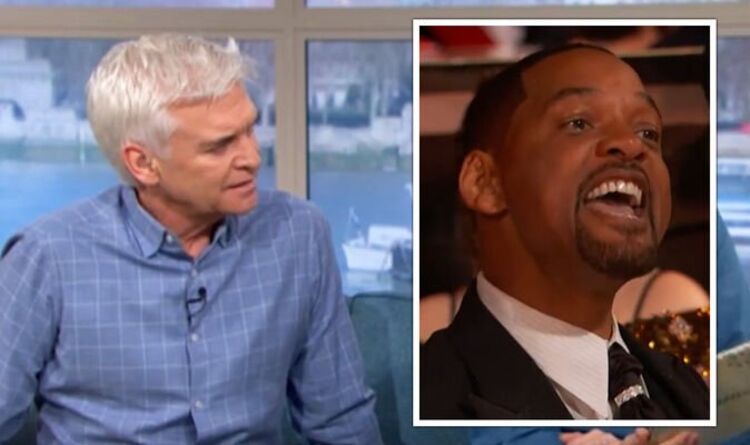 Will Smith dominated the headlines on Monday morning in the wake of the star slapping Oscars host Chris Rock after the comedian made a joke about the award-winning actor’s wife Jada Pinkett-Smith’s shaven head. Following the attack, Will tearfully accepted the award for Best Actor, but he defended his actions in his acceptance speech by saying he felt compelled to stand up for his family. Phillip Schofield shared his concerns about the outburst on Monday’s instalment of This Morning.

During the episode, Phillip and Holly Willoughby were discussing the shocking moment alongside former MP Gyles Brandreth and entertainment reporter Sam Rubin.

Trying to look forward, Gyles said: “One hopes after today we can move on.”

However, an unconvinced Phillip interjected: “I don’t know if we can move on because there is all the fallout.”

The This Morning presenter added: “What happens next?”

Phillip pointed his question to American correspondent Sam who replied: “Well one Academy Award member is essentially calling for Will Smith to have the Oscar revoked. I think that topic will be revisited.”

Will won the Best Actor award for his portrayal of Venus and Serena Williams’ father Richard in the film King Richard.

Sam added: “The Academy sent out the most ridiculous statement ever saying, ‘We don’t condone violence, meanwhile, ‘We are delighted so many Oscars were handed out’.

“The Academy has a history of kind of tripping over themselves massively so we shall see what they will do.”

When Will returned to his seat he repeatedly shouted: “Take my wife’s name out of your f*****g mouth.”

Following the attack, which caused the audience to fall into silence, Will accepted his Oscar while tears were streaming down his face.

“Art imitates life,” he said. “I look like the crazy father, just like they said about Richard Williams.