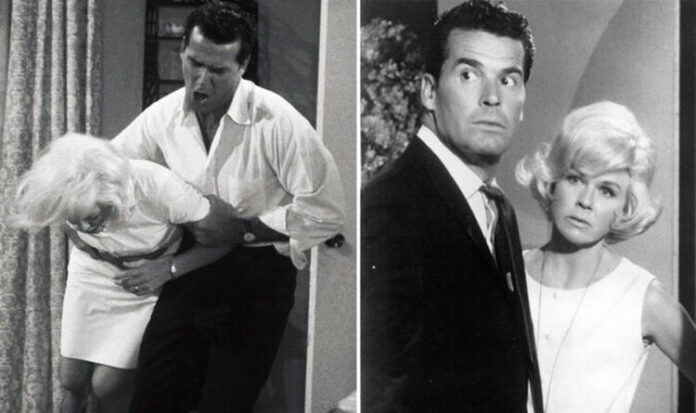 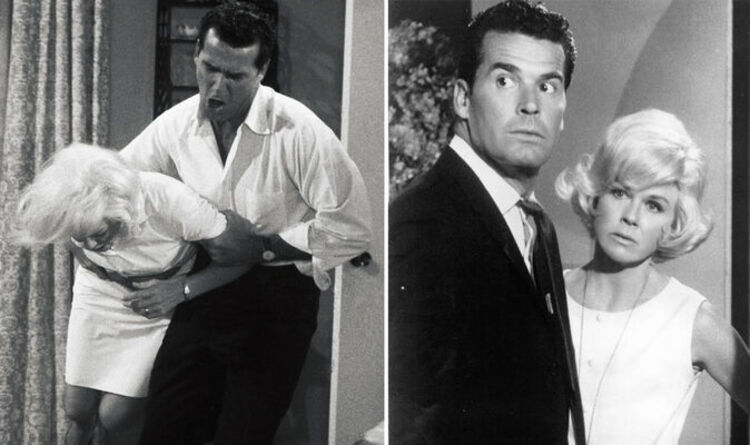 Day was the epitome of wholesome femininity, yet somehow also surprisingly sexy. It was a killer combination. The star was at the height of her popularity in the early Sixties. In 1960 and 1962-1964 she was the top box office draw in Hollywood. On screen and in public, she was a gleaming golden idol, yet her private life was filed with heartache and, too often, physical and emotional abuse. When her third husband Martin Melcher died in 1968 she would discover that he had also financially ruined her. Yet, there was also real steel beneath her smiling surface, which was amply demonstrated while filming Move Over Darling, which is on BBC4 later this week.

Nobody would know while watching the frothy romantic comedy that its leading lady actually spent days on set with her body heavily bandaged after Garner took one scene too far.

Ellen tricks her way into Bianca’s hotel room and gives her a massage. Nick bursts in and pulls her off. It was only days later that a horrified Garner realised how badly he had hurt Day.

Day also described their special bond in her typically affectionate but playful way: “Jim and I worked together only twice, in Move Over, Darling and The Thrill of It All. He’s so good at what he does… I felt married.

“We didn’t see each other much over the following years, but we’ve stayed friends because we talk on the phone regularly. I don’t know how, because Jim hates the telephone. I usually have to call him. “Can’t you pick up a phone?” I say, but he just grumbles.”

Garner, in turn, spoke glowingly of his superstar leading lady and what made her so special – and so sexy.

He said: “Doris didn’t play sexy, she didn’t act sexy, she was sexy. And then she could take a sexy scene and make you laugh. Which is better in the bedroom than a lot of things. And Doris was a joy to work with. Everything she did seemed effortless. She’s so sweet and so professional – she made everyone around her look good.

“I think Doris is a very sexy lady who doesn’t know how sexy she is. That’s an integral part of her charm… I don’t think she could have had the success she’s had if she didn’t have this sexy whirlpool frothing around underneath her All-American-girl exterior.”

Garner also named Day as one of the two sexiest stars he ever worked with.

Garner said: “I’ve had to play love scenes with a lot of screen ladies, but of all the women I’ve had to be intimate with on the screen, I’d rate two as sexiest by far – Doris and Julie Andrews, both of them notorious girls next door.

“Playing a love scene with either of them is duck soup because they communicate something sexy which means I also let myself go somewhat and that really makes a love scene work.”

Unfortunately, Day’s actual marriage was far more troubled. Melcher was disliked by many of her friends and co-stars but she adored him. He, in turn, ruthlessly exploited her as a brand, squandering all her money and then borrowing more against future projects – which he had already spent.

Even during Move Over Darling, there is a classic car wash scene in which only Chryslers are seen – because Melcher had struck a lucrative deal on the side.

The studio, meanwhile, also failed to tell Day that the scene was held back until the end of the shoot because there was a concern that all the chemicals would damage the actress’ hair and skin. Not out of concern for her wellbeing but to prevent any disruption to the schedule.

Move Over Darling was another box office smash for Day, who should have been one of the richest stars in the world by then. Except she made a devastating discovery when Melcher died.

The star’s third husband passed away on April 20, 1968, from an enlarged heart. As a Christian Scientist (like Day herself) he did not believe in seeking medical help, trusting to God instead, and had sought help too late.

Day discovered Melcher and his business partner Jerome B. Rosenthal had mismanaged and embezzled her fortune, leaving her not just broke, but deeply in debt. He had also signed her up for the CBS TV comedy show The Doris Day Show without her knowledge – and spent her advance fee.

Day sued Rosenthal and was awarded $23million. He declared bankruptcy and she was eventually paid $6million across 23 years.

Doris Day 100: Star ‘felt married’ to James Garner even though he broke two of her ribs