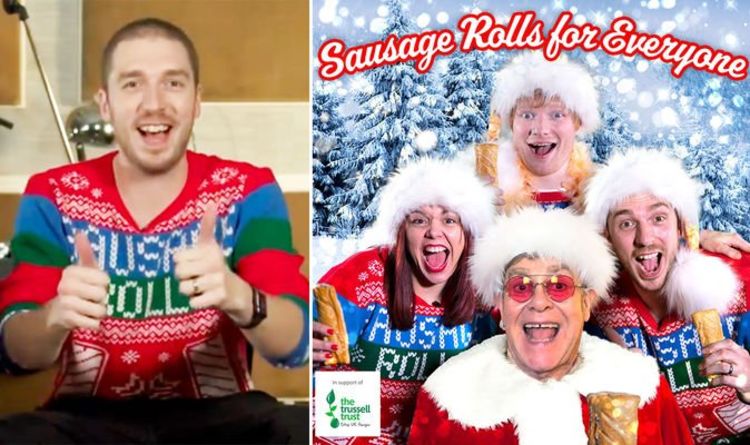 Elton John and Ed Sheeran have already released their festive charity track Merry Christmas. But in the race to Christmas No 1 the megastars are teaming up with LadBaby to help him score a fourth December at the top spot for charity. Mark and Roxanne Hoyle made the announcement this morning teasing the new novelty song, Sausage Rolls for Everyone.

The couple came on screen in a hotly anticipated new Instagram post which read: “So who’s ready to try and make history for charity with a sausage roll?

After both saying they were in, Ed and Elton joined in two before the four explained why they were attempting this fourth Christmas No 1 together for The Trussell Trust.

They said: “Over 14 million people in the UK are currently living on food banks. Over 4.5 million of those are children and 1.5 million are pensioners.

“So, we’re coming to getter to make a difference this Christmas and raise as much money as possible for people in the United Kingdom who need it most.”

The foursome continued: “Our song is called Sausage Rolls for everyone and is available to pre-order right now on Amazon and iTunes.

“And will be available on full release on December 17 and 100 per cent of the song’s profits will go to The Trussell Trust foodbank charity. So please pre-order the song now and let’s try and end food hunger in the UK.

“It’s time to bring back some Christmas magic with the power of sausage rolls! So who wants to hear a little teaser of the song?”

After Ed stole LadBaby’s “Yes mate!” catchphrase, they shared a sneak peek at the track ahead of its release.

Sausage Rolls for Everyone, is LadBaby’s parody of Ed and Elton’s Merry Christmas song, which is also raising money for the Ed Sheeran Suffolk Music Foundation and the Elton John AIDS Foundation.

Mark and Roxanne said: “We always said we’d only go for a fourth number one if we could make it bigger and raise even more money for the Trussell Trust.

“We approached Ed and Elton with an idea to do something that had never been done: to combine the music world with the social media world and join forces to make a difference to the people in the UK that need it most!

“Ed and Elton are pop royalty and they’ve both had huge success at Christmas, so we’re honoured and excited to be coming together to help families this Christmas and bring back some true Christmas spirit with the power of sausage rolls!”

LadBaby and his wife added: “No-one should go to bed hungry but today, far too many do. Can you imagine being forced into impossible decisions like heating your home or feeding your children?

“Help us make history! We HAVE to do whatever it takes to build a future where all of us can afford to go to sleep with a full stomach.”

“All profits will be donated to The Trussell Trust which is a very wonderful and important charity, so make sure you stream it, buy it and play it on repeat x.”

LadBaby’s previous three Christmas No 1 singles were We Built This City, I Love Sausage Rolls and Don’t Stop Me Eatin’.

“Food banks in its network distributed 935,749 emergency food parcels in the six months to the end of September.

“That’s more than 5,000 packages a day – and food banks are braced for need to increase to 7,000-a-day this month as temperatures plummet and families face an impossible decision between“eating or heating” in the run-up to Christmas.

Sausage Rolls For Everyone by LadBaby featuring Ed Sheeran and Elton John can be pre-ordered here.