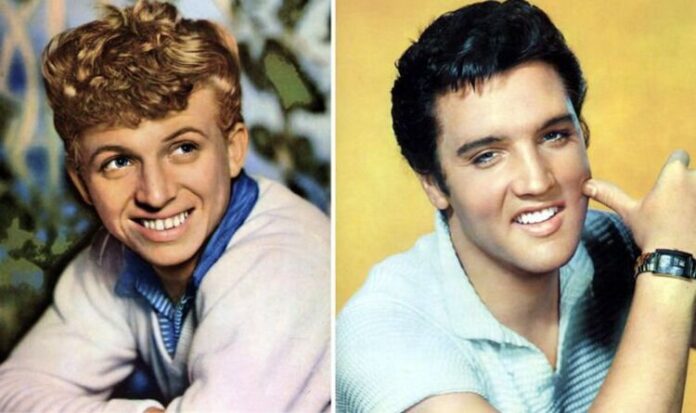 Tommy Steele was sitting at home in 1958 when he received an extraordinary phone call. He was just 22 at the time but already one of the UK’s biggest and fastest rising stars. “A voice says, ‘They tell me you’re good.’ Tommy says, ‘Who’s this?’ ‘Elvis’ says the voice. ‘Get outta here’, says Tommy. ‘Are you as good as me?’ says Elvis.” And so began a friendship that culminated in a crazy night that potentially changes everything we thought we knew about The King.

It had always been thought that Elvis almost never left the US, apart from his military service in Germany between 1958 and 1960. He made a few concert visits to Canada but that was it. His lack of travel was unimaginable considering he was the biggest start in the world. It is usually attributed to his manager Colonel Tom Parker, allegedly because he was an illegal immigrant in the US and unable to risk leaving and being prevented from re-entering.

Apparently, the pair stayed hidden inside a car as they secretly dashed around the city. The spontaneous plan started from that first phone call which had led to a friendship. Elvis was only a year older but already struggling with unprecedented levels of fame, and enjoyed talking to someone who was experiencing something similar.

In the late 1950’s, Steele was Britain’s first ever teen idol and rock and roll star. He had stopped off in the US while he was a merchant seaman and heard the likes of Buddy Holly on the radio.

A talented singer and guitar player, he brought early country music and rock and roll to the UK and reached number one with Singing the Blues in 1957.

An instant teen idol, like Elvis he was also quickly moved into films and released four features between 1957 and 1959, including The Tommy Steele Story and The Duke Wore Jeans. So, he was able to understand what The King was going through.

Kenright said in a 2008 radio interview: “It all came from that. It’s quite something isn’t it – the thought of them wandering around London together? But the impression I got was that they never got out of the car.”

Steele, himself, was unhappy that the story went public. He was 71-years-old, starring in Doctor Doolittle on stage at the time and only made one short statement on the subject.

Steele wrote: “It was an event shared by two young men sharing the same love of their music and the same thrill of achieving something unimaginable. I swore never to divulge what took place and I regret that it has found some way of ‘getting into the light’. I can only hope he can forgive me.”

At 85, he has retired from public performances but recently released an audio thriller series during lockdown. He was knighted in the Queen’s 2020 Birthday Honours and his ceremony granting Freedom of the City of London was held in July 2021.

As for that sign at Prestwick Airport – a spokesman said that, unless there was irrefutable photographic evidence otherwise, the airport maintained that it was still the only place in the UK Elvis visited.