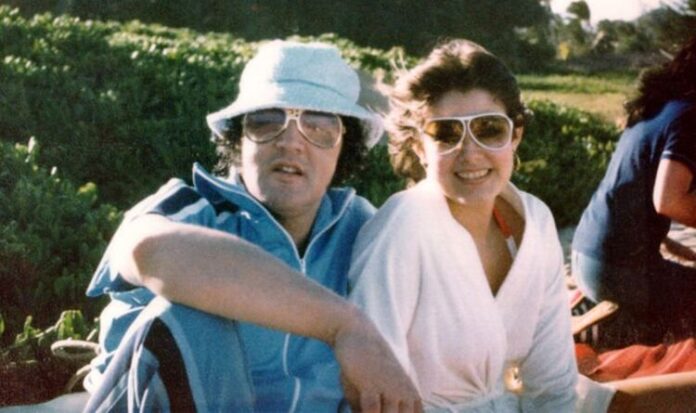 Ginger only dated the superstar from November 1976 until his untimely death on August 16, 1977. Although he had previously dated Linda Thompson for four years, he was notoriously commitment-shy. Yet, Ginger still has an enormous diamond ring to prove he planned to marry her. She even described how it was the last thing they ever talked about: “(We were) sitting in his daughter Lisa Marie’s bedroom in the early hours of August 16th when Elvis began discussing wedding plans and setting a date with me.”

Ginger also described the emotional proposal: “On the day he proposed, he said: ‘Ginger, I’ve been searching for love so long, and never in my wildest dreams did I ever think I would find it in my own backyard. I’ve been 60 percent happy and 40 percent happy, but never 100 percent. I’ve loved before but I’ve never been in love. Ginger, I’m asking you, will you marry me?’

“Elvis brought his hand out from around his back. In it was a small, green velvet box. Nearly overcome by emotion, my voice quavered. ‘Yes,’ I managed.”

However, his close family has spoken out today about their doubts that Elvis really meant to go through it.

Elvis’ cousin Billy Smith was eight years younger than the star and grew up with him, first in Tupelo and then Memphis. His family lived and worked on the Graceland estate and Billy later became a central part of the Memphis Mafia.

On his Memphis Mafia Kid YouTube channel he shares memories of his cousin and answers fans’ questions, alongside his wife Jo and son Danny.

One directly asked whether Elvis would have actually made it down the aisle with Ginger.

Danny said: “You know there has been a lot of people talking and questions have come up. I’m going to tell you my personal opinion and truly what I have seen and felt. Nothing against anybody, but no.”

And then explained why.

Danny added: “Elvis Presley in my opinion was not going to get married to anybody again and that’s Ginger Alden included. I’ll go even further than that. Had Elvis lived, I’m almost sure there would have been others ones – but after Ginger. Let’s put it that way.

“I don’t have problems with anybody … Elvis Presley, he just couldn’t be married or was not going to be married again.”

As so many others have, including Linda Thompson herself, Danny reiterated the central fact that Elvis could never be tied down or remain faithful: “Elvis loved women. The truth is the truth…”

Danny’s father Billy previously said: “He really didn’t want to be married. Elvis was somewhat fickle, it didn’t mean he did not love Ginger or Priscilla. He loved them… (But) he told me ‘I’ll probably never get married again.'”

After Elvis died his father Vernon acknowledged the relationship: “I never got to know Ginger Alden well. She’s not much of a talker, but a while back Elvis told me he’d fallen in love with her.  ‘This is the love I’ve been searching for,’ he said. ‘I want more children, a son. And I want Ginger to be my children’s mother.'”

However, matters quickly soured when Ginger’s mother sued the estate for money she claimed was promised. Elvis’ uncle Vester said: “

“Ginger was only one of the girls Elvis was dating. He would have been a fool to marry a girl like that with all his money. She tried to take over the role of mistress of Graceland but there’s good and bad ways to go about it. You can’t go pushing the family around. You can’t treat them like they’re dogs.”