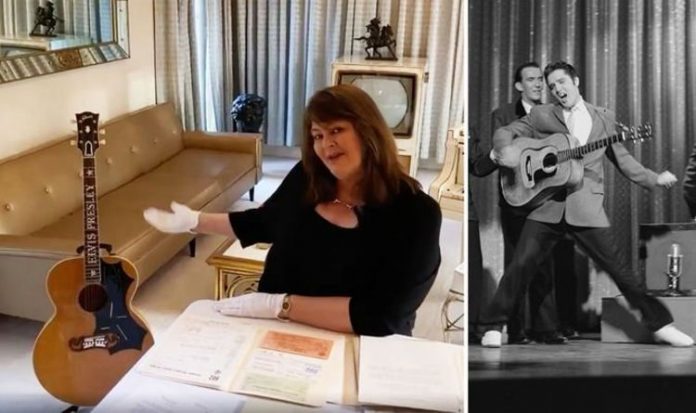 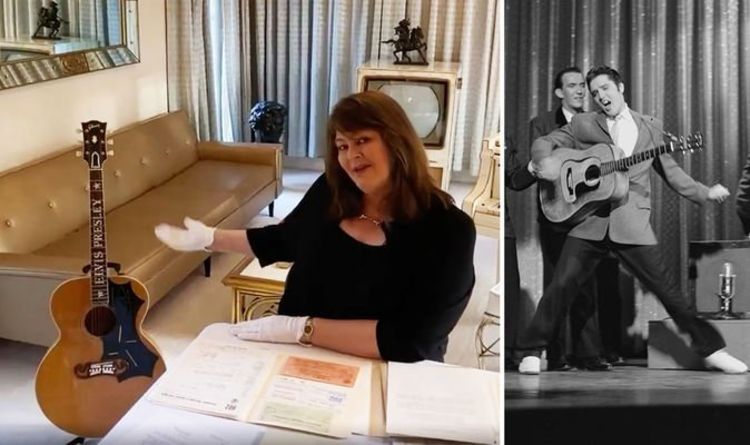 Elvis Presley made three Ed Sullivan show appearances between 1956 and 1957. A huge success for The King, his performances have become a much-loved part of his early career. And now Graceland has shot a fascinating Q&A on the Elvis Ed Sullivan appearances from right inside the Memphis mansion.

The video took place inside Graceland’s Music Room, which is just on the right as visitors head through the front door.

She started off by showing off the oldest guitar in their collection, which Elvis played in his third performance on the show in 1957.

Angie revealed it was a 1956 Gibson J-200 that The King also used in movies Jailhouse Rock, Loving You and King Creole.

The guitar was then refurbished in 1961, with his full name being added on, and Elvis continued to use the instrument for the rest of his career.

Asked why The King didn’t sing Heartbreak Hotel on The Ed Sullivan Show, Angie admitted that the track was already a big hit in the charts so the star focused on new material.

Other highlights from the Q&A include how Elvis probably met Carol Burnett backstage and details of his publicised polio vaccination.

While the Graceland archivist showed off some interesting documents related to The King’s time on the show.

Famously, before Elvis’ first appearance, Ed Sullivan said publicly that The King was “not my cup of tea”.

While according to Greil Marcus’ Elvis Presley: The Ed Sullivan Shows, he felt Elvis was “unfit for family viewing”.

After all, Elvis’ dancing, especially when he rotated his pelvis, was considered too sexualised.

Nevertheless, Elvis’ ratings were huge for his appearance on another show and so a large fee for The Ed Sullivan Show was negotiated.

What some fans may not know is that Sullivan wasn’t on the show the night of the first appearance in September 1956, having been recuperating from a car accident.

Instead, actor Charles Laughton hosted from New York, while Elvis performed remotely from Hollywood where he was shooting his first movie.

Famously, the cameras attempted to censor Elvis when he started his controversial dancing.

Shots would focus above his waist, but that didn’t stop the studio audience seeing the whole performance.

While in the end, the show was seen by around 60 million people, which was a record 82.6 per cent of the television audience.

According to Angie in the video, Elvis was requested for an appearance on the 10th anniversary of The Ed Sullivan Show.

However, The King was doing his army service in Germany at the time.

Fall Guys on Xbox One news and new update coming for...