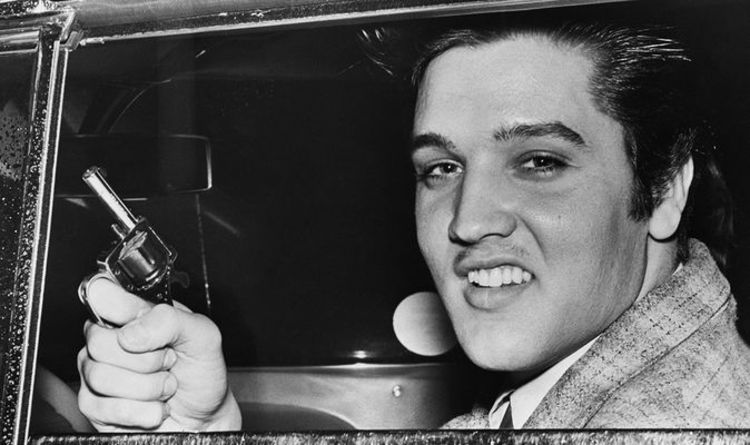 Elvis’ love of guns was well-known. The star amassed a large collection to go with his ever-growing array of state police and federal agent badges. He also famously liked to occasionally shoot the televisions at Graceland. But during a terrifying time at Las Vegas, The King went on stage armed and ready to fire with FBI agents hidden throughout the crowd.

Biographer Chris Hutchins was in Vegas at the time, working with Tom Jones, when Elvis’ life was threatened during his residency at the Hilton Hotel.

He said: “An anonymous phone caller had warned of a plot to kidnap him. The FBI had barely had time to react before a second call was made to (Elvis’ manager) Colonel Parker as I was visiting him in his office at the Hilton.

“As he put the receiver down, he told me the caller had advised him to treat the kidnapping as a matter of urgency, but he was clearly not easily panicked. After alerting the FBI to the renewed threat, he calmly persuaded me into the casino to try our luck on the tables.

“Soon afterwards, a third warning came, this time claiming Elvis would be shot on stage.”

READ MORE: Elvis: Tom Jones ‘RIDICULED The King’s singing’ behind his back

The star’s father Vernon also described the terror of the situation: “We got a call there from Los Angeles saying that a man was on his way to shoot him on stage.

“The FBI took the threat pretty seriously, and so did I, so seriously that I told the agents to tell the caller we’d pay but somehow the contact broke down, and on the night of Elvis’ opening, we thought a killer might actually be in the audience.”

“The hotel asked Elvis not to go on, and so did I.”

Obviously, in the end, nothing happened and from 1969 to 1976, Presley performed 837 consecutive sold-out shows at the Hilton Las Vegas.

Along with Frank Sinatra, Tom Jones, Liberace and Frank Sinatra and the Rat Pack, The King was part of the first wave of major stars who found a second lease of life (and income) performing at the casino mecca.