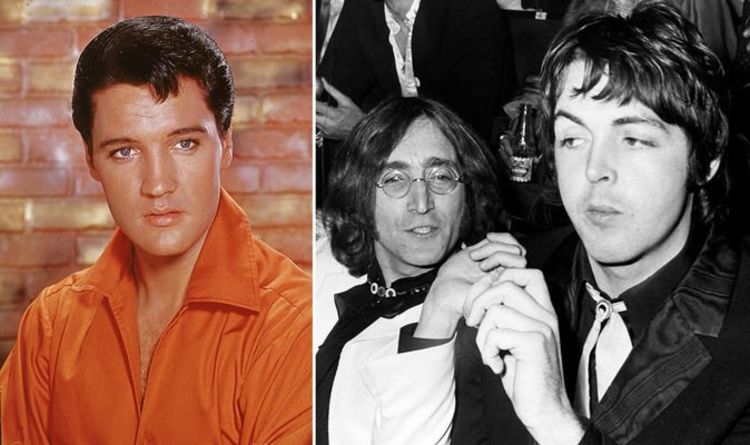 Growing up in 1950s Liverpool, John Lennon and Paul McCartney fell in love with rising star Elvis Presley’s rock and roll music. When The Beatles reached the heights of his fame for themselves, the Fab Four famously met The King at his LA home in 1965. However, as time went by, their assessment of the singer – who told President Nixon in 1970 that they were anti-American – changed.

Just two days before his murder on December 8, 1980, Lennon told BBC Radio 1 that Elvis was never the same again after he joined the army in 1958.

The King went to West Germany for his two years of military service and returned to star in a string of movies, many of which were of poor quality.

The 40-year-old said: “When Elvis died, people were harassing me in Tokyo for a comment.”

“Well I’ll give it yer now, he died when he went in the army. That’s when they killed him. The rest of it was just a living death.”

Lennon said of Elvis’ military service: “But [it wasn’t like] going to a Zen monastery and going to India to meditate.

“Or going to Scotland and growing melons or something, whatever they’re doing up there in that place.”

In 1994, McCartney shared a similar view of The King during an interview with guitar writer Tony Bacon.

The Beatles legend said: “Elvis was the guy. He ended up a complete plonker, unfortunately—he turned in the end, wanted to become a Federal drug marshal.”

Like Lennon especially, Taylor believes it was all downhill for The King after his army service.

Taylor said: “I think after Elvis went in the army, he didn’t influence [Queen] at all. In fact, he became a sort of side paragraph. He didn’t really have a lot of relevance, I thought.

“He was a rebel, but when he joined the army it all sort of disappeared into sh***y films and paying off his manager’s debts in Las Vegas.”

Upon hearing The Beatle’ view of the singer, he replied: “I couldn’t agree more. John Lennon also said Little Richard’s better than Elvis and I’d have to agree with him there!”