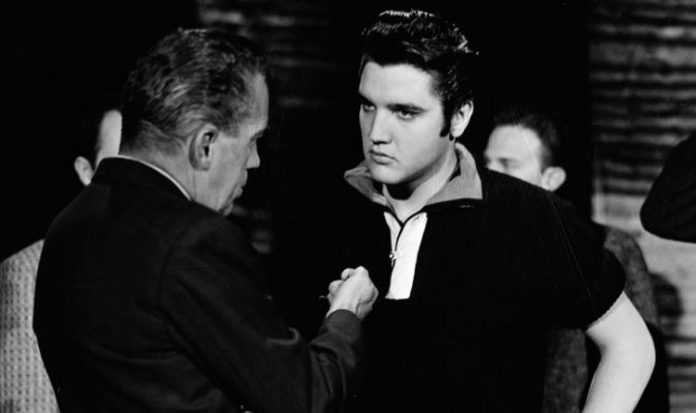 In 1956 Elvis Presley was eager to get on The Ed Sullivan Show, the biggest entertainment show around at the time. Unfortunately for him, Ed had announced Elvis would “never” appear on his show because of the hip gyrating he demonstrated while performing on another programme, The Milton Berle Show.

Elvis, who was just 21-years-old at the time, performed four songs on Milton’s show, including Hound Dog. During the performance of the legendary hit, the star slowed the song down​ ​to showcase his sensual dance moves. Of course, Elvis’ allure sent the crowd wild, but the show reportedly received a number of complaints.

He continued to dance in this provocative way during live concert performances as well, prompting one judge in Jacksonville, Florida, to threaten the star with jail time if he did not “restrain” himself at the gigs he was performing in the state later that year.

While Ed was refusing to bring Elvis on to his show, the singer instead went on The Steve Allen Show to perform. This turned out to be the best thing he could do.

The ​King’s appearance on The Steve Allen show boosted the ratings past even that of Ed’s, forcing ​the host to make a connection with Elvis’ boss, Colonel Tom Parker​. They agreed to get Elvis on Ed’s show three times – but not before negotiating​ his appearance fee to more than $16,000 ​each time.

Elvis then ​joined The Ed Sullivan Show three times throughout the end of 1956 and into 1957, but he was censored during his third and final performance.

The first two appearances Elvis made on The Ed Sullivan Show included him getting up to his old tricks and driving the audience wild with his raunchy dance. In fact, he praised the host for allowing him onto the show when he made his Ed Sullivan Show debut. The King told the cameras: “Wow! This is probably the greatest honour that I’ve ever had in my life. There’s not much I can say except it makes you feel good. We want to thank you from the bottom of our hearts.” His second appearance on the show had him play the bouncy track Ready Teddy, where he was more lively than ever while whipping his guitar around the stage. But it was this song that marked Elvis’ downfall on The Ed Sullivan Show.

On Elvis’ third appearance on The Ed Sullivan Show, on January 6, 1957, he was intentionally only shot from the waist up. This meant the viewers couldn’t see the suggestive dance moves.

Although ​Elvis didn’t mention it during the show, the newspapers the following day confirmed what had happened.

One news article read: “Elvis’ pelvis went the way of a compromise last night. Gyrating Elvis Presley undulated as usual through three rock ‘n’ roll bounces in his final appearance on Ed Sullivan’s television show. But virtually all the home viewer saw of the Pelvis was his chest and sideburns. Only an occasional shimmering shoulder crept onto the screen as the TV cameras captured tight, close-up shots.”

Despite all this uproar, Elvis’ drummer thought something else was going on with Ed Sullivan.

Years later, Elvis’ drummer DJ Fontana spoke up about when Elvis was seemingly banned from Sullivan’s show, before being censored on it.

He claimed it was all blown out of proportion to place the spotlight firmly on the TV show.

Fontana said: “It was a publicity shot just to get people to watch and see what was really going on. There was nothing going on.”

Whatever the cause, Elvis’ first appearance on The Ed Sullivan Show attracted a record-breaking 60 million viewers.

The record was only ever beaten by The Beatles who performed on the show a decade later in 1964.

When the Fab Four graced the screen, they played to an unbelievable 73 million viewers.

Elvis Presley was threatened with jail and censored for TV performance