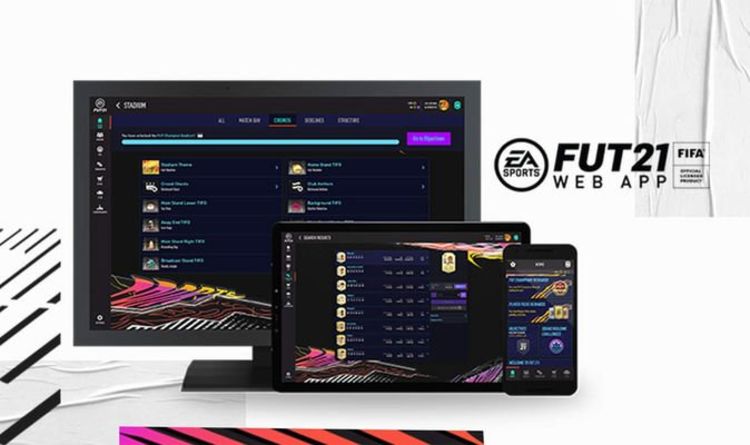 It won’t be long before gamers have access to the FIFA 21 Web App, which will provide the first taste of Ultimate Team action.

The main use of the FIFA 21 Web App will be managing your FUT team on the go, but there are plenty of other reasons to check it out.

The Web App also lets you configure your squad and manage who to buy, and usually, provides extra ways to unlock packs.

This year’s FUT Web App is going live a full week before the full game goes live, so there will be plenty of time to check all of its features.

WHAT TIME IS THE FIFA 21 WEB APP COMING OUT?

EA Sports has confirmed that the FIFA 21 Web App release date has been set for Wednesday, September 30, 2020.

The news can be found on the official FUT 21 website, which confirms: “The FUT Web App and other FIFA Web features are down for maintenance while we prepare for FIFA 21. The new web app launches on September 30th.”

What we don’t know is when exactly the new FUT Companion App will be going live on servers, or when access will be granted to the FIFA Web App.

Based on years past, we would expect the FIFA 21 Web App release time to be set for around 6pm BST, in the UK.

For now, there is no guarantee when EA Sports plans to launch the FIFA 21 Web App, so it’ll be worth checking for updates via the official social media feeds.

The Web App is expected to offer the usual services, allowing fans to buy and sell players on the transfer market while also making it possible to handle tactics, complete squad building challenges and claim rewards from various cup and division events.

From what has been reported so far, returning FIFA players will be getting some kind of reward the first time they log back into the revamped Web App.

It’s unclear how big this reward will be, but it seems likely that EA Sports will provide something worth opening on the day.

When it comes to the main game, some gamers will be getting the chance to start playing FIFA 21 very soon.

And if you have the right combination, you’ll be among the first to get your hands on FIFA 21 in October 2020.

From what has been shared so far, the EA Play Early Access period for FIFA 21 will be starting on October 1, 2020.

This looks set to be the next time gamers can try out FIFA 21, with no demo being released this year.

Here’s what the FIFA site states regarding the EA Play release, telling fans: “An early trial of FIFA 21 starting October 1st, as well as other EA Games before their full launch day.”

However, it should be noted that while you can trial FIFA 21 on October 1, it will only be for a limited time.

These usually only last around ten hours, so don’t expect to be able to make a huge amount of progress before the full launch.

The good news is that your progress will carry over, so you can pick up where you left off if you decide to purchase the game.

Pre-ordering the FIFA 21 Champions Edition provides you with a number of bonuses, including 3 days Early Access.

This means you can start playing the game from October 6, although we’re not sure at this point what the start time is.

For everyone else, the final release date for FIFA 21 has been set for October 9, 2020.

Rock singer Fish speaks out on industry struggle ’30 percent will...