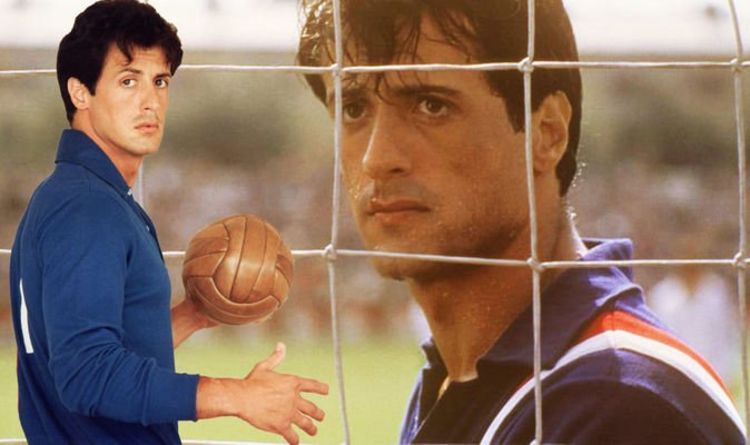 Rocky and its 1978 sequel established Stallone as a tough guy on screen – and he had quickly become known for being just as outspoken and hard-headed behind the scenes. When he signed up for Escape to Victory, he quickly had his prejudices knocked out of him on the football pitch, including his insistence that he should score the winning goal – despite playing the goalie. Meanwhile, Michael Caine made it clear some of his other behaviour on set would also not be tolerated.

The basic premise of the movie had the Rocky star playing a Second World War Allied Prisoner of War. He becomes the goalkeeper on a team of imprisoned professional football players who plan to make a daring escape during a Nazi propaganda match against a German team staged in Paris.

The film hit headlines because it included an extraordinary array of famous footie players from Pele and Moore, to Osvaldo Ardilles and numerous from Ipswich Town, which was one of the biggest teams in Europe at the time.

Despite all the hype and the world-famous players involved, Stallone admitted he swaggered on to set and didn’t even bother to warm up before he started his first scenes in goal. Various broken bones would follow.

Stallone told the BBC: “That was one of the low points of my life. What a butt-kicking I got! I still have a broken finger from trying to block a penalty by Pele.

“He put on a pair of World War II shoes, which were steel-tipped, and the ball was like a cannonball – it was twice as thick and heavy as footballs are today…

“He was telling me he was going to take a shot and I thought ‘It’s soccer, what’s the big deal? It’s easy.’ The ball still flew past me before I could move…

“He did it again, and it ripped through the back of the net and broke a window in the barracks where we were filming. I went ‘Are you kidding me?’ I found a new kind of respect.”

Stallone eventually started to properly listed to advice on set from England’s World Cup winning goalkeeper, Gordon Banks, and also accepted that he couldn’t actually score the winning goal (on top of the fact that in the film, the match is eventually a draw). Other behaviour, however, also angered the cast and crew.

The actor demanded that he was only called to set when a shot was ready to take, as he was busy writing the script for Rocky III. But when he also started to turn up late, Caine told him he too had important things to do elsewhere (he didn’t really) and would henceforth turn up whenever he liked. The point was made and Stallone was always on time.

The actor’s dedication to his role, however, was never in dispute. Despite the fact it was a film ostensibly about sport, he actually had to get ‘out of shape.’

Stallone shed weight to look more realistically like a prisoner of war, losing 40 pounds. He said: “My waist is down from 33 to 29 inches, I run every morning, I’m trying to look a little gaunt.”

He also admitted he had not signed on for the story or his reputed $1.8million payday, but rather because the film was being helmed by the legendary John Hughes.

Stallone said: “There are some directors you just almost automatically jump at the chance to work with.”

Huston, in his turn, later distanced himself from the film and said he only did it for the money!

Caine, meanwhile, was as bewildered as anyone else that he was offered the role of a supposed professional football player at the age 47. However, he revealed he only accepted the role for the chance to meet and work with Pele.

Unsurprisingly his football skills and general athletic prowess did not impress anyone, with Ardiles calling them: “Awful, and he couldn’t even run twenty yards.”

Stallone, battered and bruised by his experience later said: “Working in this business, I’ve met some of the champions, and tried to figure out how they do it. Training for ‘Rocky,’ I boxed with Muhammad Ali. Learning how to play soccer…tomorrow morning, I’m gonna get lessons from Pele. What’s next? I need a little quiet. Maybe chess with Bobby Fischer.”