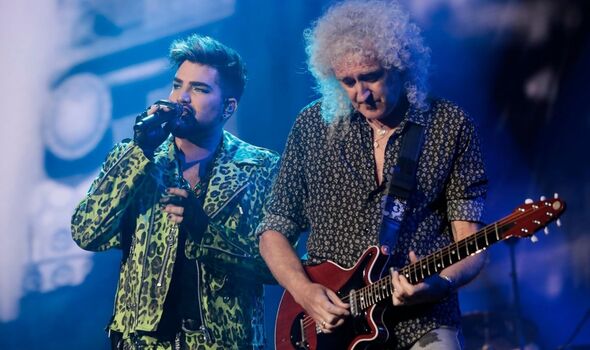 A new documentary tonight illustrates how Freddie Mercury, Brian May, Roger Taylor and John Deacon were brought together to create the global phenomenon that was, and still is, Queen. It is more than 30 years since the Bohemian Rhapsody singer died, but the band he propelled onto the world stage remains as popular as ever. The programme documents Queen’s rise to the top, focusing on key moments in the band’s history, namely the ‘A Night at the Opera’ album which brought them international recognition. The first part of ‘Queen: A Rock History’ airs on Channel 5 at 9:15pm tonight, and is followed by ‘Queen: Live At The Odeon’, one of the band’s most iconic gigs recorded in Hammersmith on Christmas Eve 1975.

It’s no secret that bands clash and have difficulties coming to terms on certain things, with Queen no exception, as Brian revealed in an interview last year.

Speaking to Classic Rock Magazine, he said: “We were merciless, we said terrible things.

“It was a struggle. That’s what breaks bands up.

“There were lots of arguments about how much input everybody had.

“We were like four painters with a brush each but one canvas.

Brian May and his Queen bandmates had blazing rows, he once admitted. (Image: GETTY)

Freddie on stage with Brian at Wembley Arena. (Image: GETTY)

“There was conflict, but we got there.”

Yet Brian revealed these arguments actually brought the band closer together, and proved instrumental in their success.

He continued: “We all influenced each other. That was the secret of Queen.

“We pushed and pulled each other, mercilessly.

“We sometimes said terrible things, but we got the best out of each other.”

Brian offered a fascinating insight into the dynamics of the band during the interview, explaining that Freddie would often act as a diplomat, ensuring that the show did indeed go on.

Despite his bold onstage persona suggesting he might have been the one at the centre of the arguments, Freddie managed to help feuding Brian and Roger resolve their issues.

Brian said: “We had big, big dreams. We wanted it all, and we felt we had what it takes.

“It’s funny because if it had been just me and Roger, we would never have stuck together.”

He said that despite being “so well-aligned in some respects” with Roger, there is “not a single subject we don’t have opposite opinions about”.

Brian continued: “We needed someone who would be the diplomat. And, strangely enough, Freddie was that guy.

“Everybody thinks that Freddie was that flyaway guy, but he was very pragmatic.

“If he saw a situation that was arising between me and Roger, he would manage to find a way through, a compromise.

“One of Freddie’s great catchphrases was, ‘We don’t compromise.’

“But within the band we did. And that’s why we survived.”

Queen were pioneers in the music industry — Bohemian Rhapsody stayed at number one in the UK for a staggering nine weeks, and helped popularise the concept of the music video.

By the early Eighties, they were one of the biggest stadium bands in the world, and their Greatest Hits compilation album is the best-selling album in British history.

Such was Queen’s global domination that their 1985 Live Aid concert is widely considered the greatest in rock history, and came just a year before Freddie’s last performance with the band at Knebworth.

Freddie died of bronchopneumonia, a complication of AIDS, in 1991, leaving behind a lasting legacy.

John Deacon retired in 1997, admitting “there is no point carrying on” without the irreplaceable Freddie.

Since 2004, Brian and Roger have toured under the ‘Queen +’ name, with vocalists Paul Rodgers and more recently Adam Lambert.