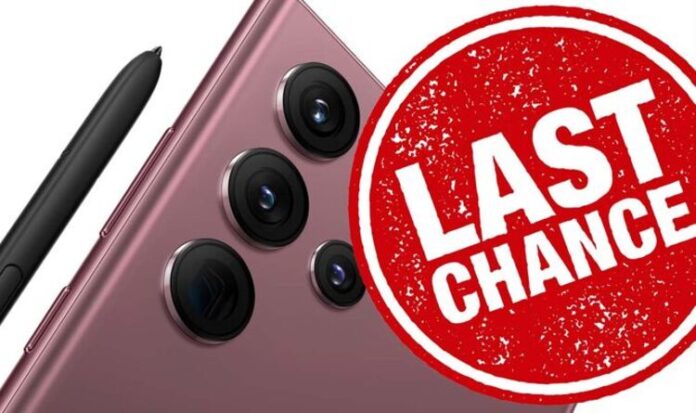 Samsung is running plenty of great money-saving deals on its S22 range, but one incredible offer is about to end this week. Right now, Galaxy fans can save up to £530 on the S22 Ultra when they trade-in an eligible handset, or £200 off an S22 or S22+ when they trade-in ‘any Android phone in any condition’. And if you want to make this tidy saving you need to act quick, as the trade-in offers for the S22, S22+ and S22 Ultra are only available for a limited-time with the deal ending on Thursday March 31.

Whenever Samsung launches a new Galaxy phone they usually offer plenty of incredible money-saving deals to entice customers to pick up its latest and greatest handset at launch.

And there are a number of other money-saving deals which are available on the Samsung website right now which are ending in the coming weeks.

If you purchase an S22, S22+ or S22 Ultra then you will also be eligible for claiming a free pair of Galaxy Buds Pro worth £219. For those who don’t already have a pair of wireless earphones or buds, this will be a great accompaniment to your snazzy new phone.

However, this deal isn’t around for much longer with this promotion valid until April 5. A few weeks after this offer ends another money-saving promotion will be shutdown.

A year’s worth of Disney+ costs £79.90, and will give you access to tonnes of unmissable content including exclusive must-watch shows like Moon Knight which is launching this week, the vast back catalogue of Disney, Pixar, Star Wars and Marvel movies plus other hit shows such as every episode of The Simpsons and much more.

This money-saving deal also ends in April, with the offer running until April 22. With these promotions ending soon anyone that has been thinking of picking up an S22 for awhile may want to act quick to grab a new handset and these deals while they’re still available.

If you are thinking of picking up an S22 handset SIM-free then you may be looking around for a SIM-only deal to compliment your handset.

One of the best SIM-only deals available on the market is with EE who regularly top studies looking at best service offered by UK mobile providers.

EE currently has a SIM-only plan that offers a whopping 160GB of 5G monthly data for £20 a month. You will also get six months worth of Apple Music thrown in entirely for free. If you’d rather go with a different provider then you can find details on other SIM-only deals below…

Galaxy S22 Ultra: Samsung offers one last chance to save £530

Beware of this Windows 10 update, it could be vicious malware...