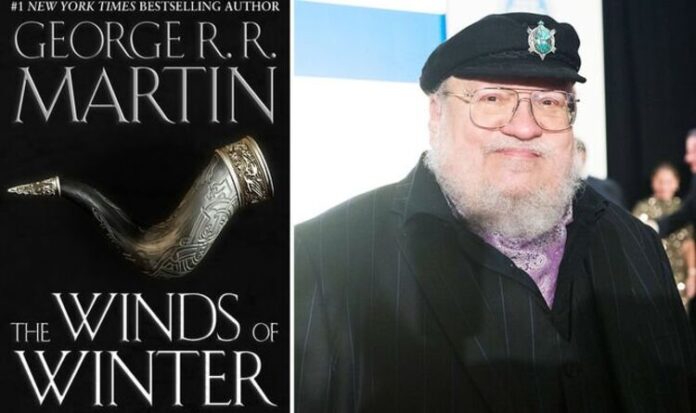 The last time George RR Martin penned a book in his A Song of Ice and Fire series was before Game of Thrones first aired over a decade ago. Since then, the 73-year-old has been incredibly busy with all sorts of projects including the upcoming prequel spin-off series House Of The Dragon. Admittedly, he did publish Fire and Blood, a history of the Targaryens, a few years ago but still hasn’t finished the long-anticipated The Winds of Winter.

In a recent blog post, Martin updated that he’s managed to make a lot of progress on The Winds of Winter in 2020, but not so much in 2021.

As fans continue their wait with some really losing their patience, the Fantasy author has now announced a new book.

His team wrote on his blog: “We’re so excited to announce The Rise of The Dragon, a lavish visual history of House Targaryen – the iconic family at the heart of HBO’s Game of Thrones prequel series, House of the Dragon – featuring over 180 all-new illustrations! For those of you who are wondering: What’s the difference between The Rise of the Dragon and Fire & Blood? Think of The Rise of the Dragon as a deluxe reference book, in which Westeros’ most infamous family – and their dragons – come to life in partnership with some truly incredible artists.”

Martin’s minions added: “Fire & Blood was scribed as a grandmaesters’ account of events from Aegon Targaryen’s conquest of Westeros through to the infamous Dance of the Dragons, the civil war that nearly undid the Targaryen rule. The Rise of the Dragon will cover the same time period, but is written in a more encyclopaedic style similar to The World of Ice and Fire. In fact, The World of Ice and Fire authors Elio M. García, Jr. and Linda Antonsson have returned to help with this time.

The Rise of the Dragon is perfect for fans steeped in the lore of Westeros, as well as those meeting the Targaryens for the first time in the HBO series House of the Dragon. The book will be available in October 2022!”

Given that Elio and Linda have been working on The Rise of The Dragon with Martin is a good sign that hopefully he’s not totally put The Winds of Winter aside. Nevertheless, some fans were not happy with the news of a different book being published before.

On Twitter, Michael Ives wrote: “It’s been 3,901 days since the release of [A Dance with Dragons].”

However, Brian Fisher tweeted: “It’s so sad seeing all these negative post crying for TWoW. I’m excited for any releases we get.” But The Pawn replied: “Why ? I think he has made it clear, he doesn’t care about us, his fans. So why are you still supporting him??”

Others had lost hope of A Song of Ice and Fire ever being completed, with Josh Alder commenting: “So should we stop hoping for Winds of Winter and [A Dream of Spring] at this point?” To which, another fan replied: “You are still hoping? Really?”

And Alex A Sen pleaded with Martin: “Please [George] stop spending time in spin offs and prequels and focus on delivering THE WINDS OF WINTER. We need a closure for the Song of Ice and Fire. I’m actually on my knees while writing this expecting to get a release date for TWOW.”

The official description for The Rise of The Dragon reads: “This lavish visual history―featuring over 150 new, full-colour illustrations―is a stunning introduction to House Targaryen, the iconic family at the heart of HBO’s Game of Thrones prequel series, House of the Dragon. For hundreds of years, the Targaryens sat on the Iron Throne of Westeros while their dragons ruled the skies. The story of the only family of dragonlords to survive Valyria’s Doom is a tale of twisty politics, alliances and betrayals, and acts both noble and craven. The Rise of the Dragon chronicles the creation and rise of Targaryen power in Westeros, covering the history first told in George RR Martin’s epic Fire & Blood, from Aegon Targaryen’s conquest of Westeros through to the infamous Dance of the Dragons―the bloody civil war that nearly undid Targaryen rule for good. Packed with all-new artwork, the Targaryens―and their dragons―come vividly to life in this deluxe reference book. Perfect for fans steeped in the lore of Westeros, as well as those who first meet the Targaryens in the HBO series House of the Dragon, The Rise of the Dragon provides a must-have overview for anyone looking to learn more about the most powerful family in Westeros.”

The Rise of the Dragon: An Illustrated History of the Targaryen Dynasty will be published on October 25, 2022.