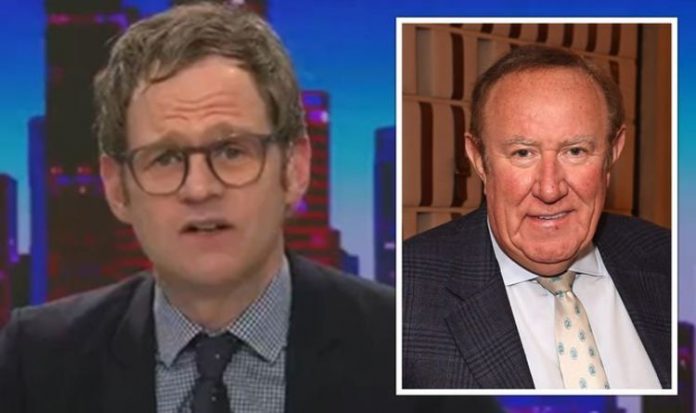 Mark Dolan mocked the highly respected journalist for leaving GB News after only nine shows and speaking out against the TV station. Mr Dolan said: “It’s been really difficult without Andrew, I’m not going to lie. Yes, our daytime and evening ratings have grown significantly, and we’ve had over a billion views online, but we really miss having someone so positive, and so constructive around. Someone that really backs the team, that he was part of creating.

“Those talented young journalists and presenters, were looking forward to having you as a mentor Andrew, but you taught them, a different lesson.

“Andrew is none too happy with some of our output and he called ME a shock jock. I was shocked, I thought he was the Jock. Look, Andrew Neil has a HUGE future.

“He may even go back, to the license-fee funded BBC, which would be confusing, because he started GB News to be anti-woke, but Andrew knows best. If he does go back to the Beeb, or that Spectator TV show he does in his bedroom, I just hope he’s able to get through more than nine shows. But if he doesn’t, who could blame him? The guy’s only human.

“So please set aside your own selfish concerns, as we navigate our way out of a pandemic and the biggest recession in 300 years, and spare a thought for the former chairman of GB News and presenter for nine days he won’t get back, Andrew Neil. Andrew – we feel your pain.”

His rant received a mixed response from GB News viewers.

While Matt Gunner added: “Oh dear, clearly Mark Dolan’s feelings got hurt when Neil took a swipe at him. Neil walked out ages ago but Dolan’s been sitting on it stewing.”

John Myles noted: “It’s a shame that Andrew Neil left GB News under a cloud of animosity. I’m not sure if it was because of all the technical problems or personality problems or both. But GB News is giving new young presenters a platform and has weathered those storm clouds.”

Neil said he was in “no rush” to return to television but that he did not want GB News to be “the full stop in my broadcast career”.

He said his two main issues with GB News were its production values and ideological stance.

“My fundamental mistake was to get into bed with people who I thought shared my vision, but didn’t actually,” he said.

“And yet it was doing things … that were not me.”