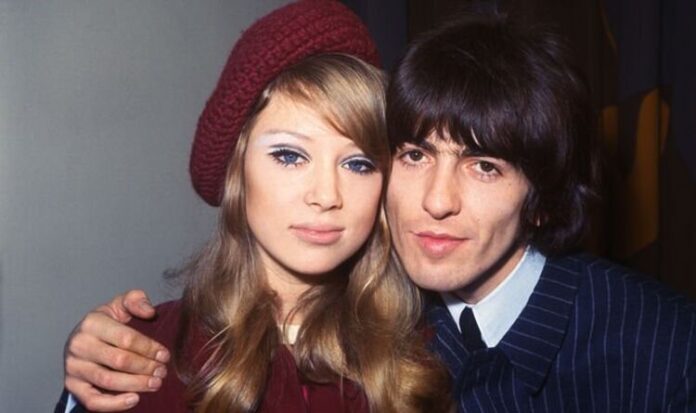 George Harrison died on November 29, 2001. The legendary member of The Beatles had suffered from lung cancer in recent years, and in his final years, it was also revealed he was getting treatment for a brain tumour at a clinic in Switzerland. A short while before his death he visited his ex-wife, Pattie, for what may have been the final time.

George and Pattie first met in 1964 and started a passionate relationship. Just two years later, in 1966, they were married. The pair enjoyed a loving marriage until 1977 when they split up.

Their relationship had become tense as George became more involved with his Indiana spirituality movement of Hare Krishna. They had also reportedly fallen out over disagreements regarding adopting children. George was reportedly unfaithful, and Pattie called his infidelities with Ringo Starr‘s wife, Maureen Starkey, “the final straw”, splitting them up.

Two years later, in 1979, Pattie married George’s close friend and prominent musician Eric Clapton. But their relationships were all quite healthy. George even played guitar at Pattie and Eric’s wedding.

But in 2001 George gave his final goodbye to Pattie.

Pattie recalled: “About three months before he died, he was in my area. He was going to see Ringo, and he popped in.”

The proud member of The Beatles was adamant that he was going to keep a brave face, however, and gave nothing away to Pattie. She said: “He brought me a few little gifts and some music to listen to, it was really sweet.” But the star’s former wife knew something was amiss with the My Sweet Lord singer.

READ MORE: George Harrison hit out at The Beatles in song – ‘Bl***y headache!’

Just a few months later, George died. He was surrounded by his loved ones: his wife, Olivia Harrison, his son Dhani Harrison, and his friend Ravi Shankar.

Pattie was devastated when she learned of George’s death.

George was a large part of Pattie’s 2007 memoir, Wonderful Today. When writing about the star’s death, she remembered: “I burst into tears when I heard he had died; I felt completely bereft. I couldn’t bear the thought of a world without George.” She added: “When I left him for Eric, he had said that if things didn’t work out, I could always come to him. It was such a selfless, loving thing to say. Now that sense of security had gone. At the end I hadn’t grasped how ill he was as I hadn’t seen him for a few months.”

The former model continued: “I think I’ll miss George for the rest of my life. I would have incredibly vivid dreams that he was alive. Then I would wake up and the reality would wash over me.”

But even in George’s final days, he was still light-hearted and joking with his friends, including Ringo.

Ringo once spoke candidly about the final time he saw George. He explained: “The last weeks of George’s life, he was in Switzerland, and I went to see him, and he was very ill. You know, he could only lay down. And while he was being ill and I’d come to see him, I was going to Boston, ’cause my daughter had a brain tumour. And I said: ‘Well, you know, I’ve got to go, I’ve got to go to Boston.'” An emotional Ringo realised: “It’s the last words I heard him say … He said: ‘Do you want me to come with you?'”