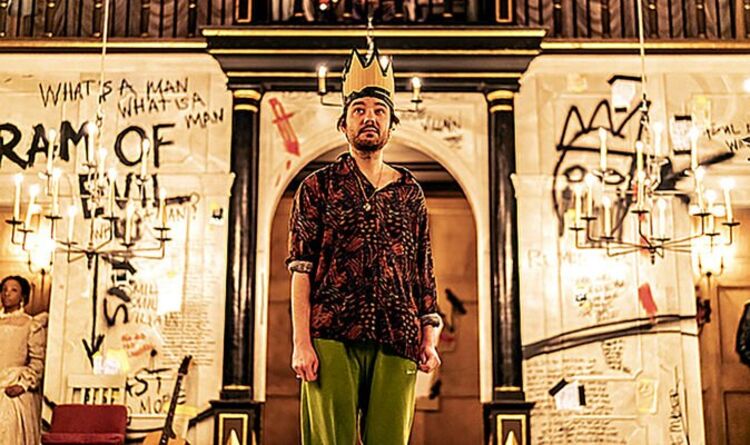 To have witnessed the magical stage desecrated by this atrocity would have sent him spiralling into a depression. Set in an indeterminate era, with some of the cast in traditional Elizabethan costumes and others in a motley of modern dress, it aims at comic irreverence and falls flat on its fanny by candlelight. Diverse casting includes a Brummie Hamlet (George Fouracres) and a female Laertes (Nadi Kemp-Sayfi), while Rachel Hannah Clarke’s Ophelia is Straight Outta Peckham. None of this would matter if director Sean Holmes could martial his ideas into anything remotely coherent.

On stage guitarist (Ed Gaughan) plays snatches of Smiths’ songs and creates atmospheric sounds until stepping in as the Gravedigger and delivering a stand-up routine of his own devising while tapping a beat on a skull with a leg bone.

The Players act out a scene from Romeo and Juliet and the elegant set is spraycanned with graffiti. Portable electric lights are brought on to augment the candelabras though they do little more than illuminate the gaping holes in the production.

If this is an attempt to draw in a younger generation, what is the point of getting the audience to sing Kenny Rogers’ The Gambler whose lyrics are unlikely to run trippingly on the tongue of anyone under forty?

As for the transparently self-conscious comments anticipating outraged reviews in the ‘newspapers’ and a lame attempt to unpack the artifice of performance and interrogate the illusion of reality that theatre is heir to (which Shakespeare does perfectly well without cack-handed intervention) words – almost ‑ fail me. This ain’t rock and roll, this is pitiful.

Hamlet is at Sam Wanamaker Playhouse until April 9