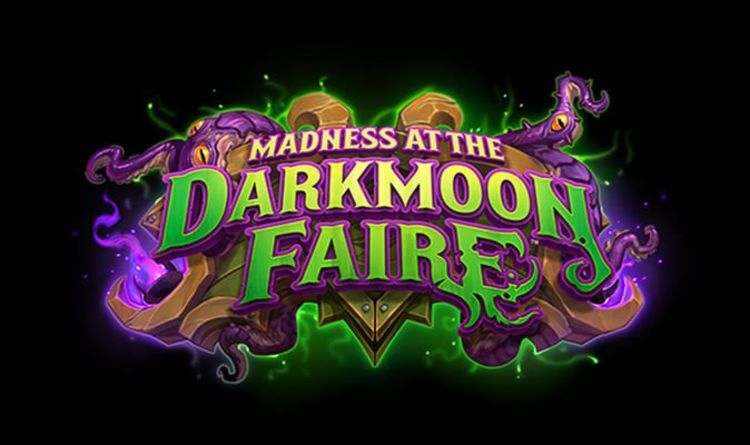 Blizzard has announced its plans to launch its next major Hearthstone expansion in November.

The Darkmoon Faire expansions will add 135 new cards to the game and has a release date set for November 17.

The good news is that while we don’t know about all the new cards coming to the game just yet, we have had a quick look at some disgusting returning characters.

The Old Gods—C’thun, N’Zoth, Yogg-Saron, and Y’Shaarj—are coming back and each Old God drives a different deck archetype and has a potent Battlecry capable of turning the tide of a match.

A message from Blizzard adds: “They’ve really embraced the festivities—take Yogg-Saron, Master of Fate, whose Battlecry lets you spin the Darkmoon Wheel if you’ve cast 10 spells this game!

“Players can also tamper with Old God artefacts: four ancient spells with zany effects that hearken back to the abilities of the original Old God designs.”

New Darkmoon Faire cards will be revealed over the coming weeks in the lead up to the big expansion launch on Mobile and PC.

Blizzard has also confirmed that the Madness at the Darkmoon Faire expansion will also introduce a new Keyword: Corrupt.

Corrupt cards upgrade in your hand after you play a higher cost card. This means gamers can plan ahead and upgrade their Corrupt cards before playing them for a major payoff.

Hearthstone are also launch a new mode called Duals, which can be tested early today.

This means pre-purchasing Madness at the Darkmoon Faire bundle to get early access to Duels along with a special Legendary Quest chain that rewards 6 Scholomance Academy Packs.

A brief description of Duels and how it works can be found below:

In Duels, you’ll choose a Hero, a Hero Power, a signature Treasure, and build a 15-card starter deck from your collection before facing off against a series of worthy human opponents. Between each match, you’ll level up your deck by adding minions, spells, and powerful Treasures

Duels will be accessible through the Modes button from the Hearthstone main screen, where you’d go to play Battlegrounds or Arena. Here’s how it works:

When you start a Duels run, you’ll choose a Hero, a Hero Power, and starting Treasure.

Then, you’ll build a starter deck of 15 cards from your Collection and play your first match. In its debut season, Duels will include a curated assortment of cards from a number of sets, including Scholomance Academy, One Night in Kharazan, Curse of Naxxramas.

After the match is over, you’ll gain additional health, and get to level up your deck by picking one of three sets of cards categorised by theme. Occasionally, you’ll also be able to pick from a selection of three incredibly powerful Treasures.

While separate, Duels uses the same Ratings system as Battlegrounds. Your run ends after you lose three times, or net 12 wins.

Patch notes have also been released today for the new Hearthstone update going live, which focuses on the Battlegrounds game mode.

Players with Battlegrounds Perks will have early access to Zephrys, The Great before the Hero is formally released on November 5.

We’re making small adjustments to Battlegrounds Parties during matchmaking and in post-game rating updates to address the potential advantages that come with queueing as a group.

Evocation and Astromancer Solarian will be eligible for a full dust refund for 2 weeks after the 18.6 patch goes live.

Meet Silas Darkmoon, the Darkmoon Faire’s founder and lead showman. Log into Hearthstone after the 18.6 patch goes live to receive the Silas Darkmoon Legendary minion for free, available to play immediately! Round and round they go, where they’ll stop, nobody knows! Limit one per account.

Elvis Presley: Guess which of The King’s songs was released 26...