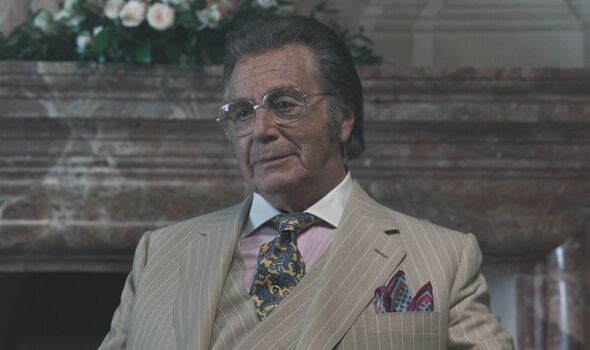 House of Gucci was released on Blu-ray and DVD this week, immediately after it snapped up an Oscar nomination. Bringing together a star-studded cast including Lady Gaga, Adam Driver, Al Pacino, Jeremy Irons and Selma Hayek, the movie is wall-to-wall talent in front and behind the camera, including famed director Ridley Scott. Yet, it was Jared Leto’s performance and look in the that dominated headlines when it premiered in cinemas back in November, 2021. Express.co.uk sat down with Göran Lundström, the star’s Prosthetics Designer, who revealed “everyone else never got to see Jared on set,” only him.

Jared Leto is known for being a method actor, from the crazy on-set stories from Suicide Squad as the Joker to his complete commitment to roles from blind billionaire with a god-complex in Blade Runner: 2049 to HIV-positive transsexual, Rayon, in Dallas Buyers Club.

He is an immediately recognisable face in Hollywood, but when he was cast in Ridley Scott’s House of Gucci, the star was dramatically transformed into Paolo Gucci.

Leto remains in character for weeks, even months once he has perfected his performance, so for many cast and crew members, they don’t get to meet the man behind the character until after filming has wrapped.

This was true on House of Gucci, though Lundström was one of the privileged few that saw both Leto and Paolo. Also nominated for Coming 2 America in this year’s Oscars, he is known for projects such as Star Wars’ Rogue One, Wrath of the Titans and X-Men: First Class.

House of Gucci: Available to buy on Blu-ray and digitally (Image: MGM)

Lundström explained: “We did the makeup and then we travelled to set as with him as Paolo, so [everyone else] never got to meet [the real Jared]. We had to but even so it was basically us trying to help him to get into character each morning and he wanted us to start calling him Paulo and help him get [into the role]. It’s not like he is put on a switch and just became Paolo, basically like it’s a transformation for him. He needs that time to get into the character.”

The star’s performance has been one of the central discussions surrounding the film, as the actor completely gave himself to the role. Taking on Paolo’s authentic Italian accent and his mannerisms, he had little to go on as the real figure died in 1995.

He had help on set though, as the production was on location in Italy, hiring a diverse crew from around the world.

Lundström continued: “My assistant Federica Castelli is Italian. So, when he was practicing his lines, he had someone in the room who could actually see if he had any issues with any pronunciation, she could help him so that was also good. So, we heard him like creating Paolo. Well, part of it, he did a lot of work before we met him, but he was still working on the character while we were doing the makeup. So that was fun was really fun. And I think for everyone else that they never got to see Jared on set, only us. That was also fun.”

One of the main challenges Lundström had to overcome was the fact that he didn’t meet Leto until after the makeup was complete. This could have been disastrous if it wasn’t for the 3D technology used by the team to ensure they were prepared for anything.

The design said: “There are always things happening that you don’t anticipate, you know, you kind of anticipate that things are going to happen but you don’t know what’s gonna it’s never straightforward to do these kinds of things. So, you have it in the back of your head like we have to have time for various issues. I know that the thing we did on this one that was new to me was 3D printing because we didn’t get to see Jared and one of the things that the production told me was, I’m doing this I’m making it for my head scab. And I was like, oh, okay, that’s another obstacle. I’ve never done this. Well, I was more thinking. They give me what they have. And that’s what it’s going to be you know, I can’t control it.

“I didn’t get to meet Jared until on the first test. No makeup. You want more than three weeks. You want to have time to change things. You don’t want an actor with really long hair that’s going to go bald. So, all these things that we have to overcome. And then when I look at it now, I like this system. But at the moment we’re in the middle. It’s like being a war. Like I don’t know how it feels being in a war, but it feels like you’re just keeping your head down and just trying to get it done and not think too much. And just you know, go with your gut feeling.”

The artist, who was also nominated for Best Makeup and Hairstyling for 2018’s Border, shockingly revealed he only had three weeks between the call for the job and meeting Leto. With thirty years of experience under his belt, it was actually a challenge he was looking forward to taking on.

Lundström said: “I didn’t have time to think about the scary part of it. Because I got the phone call. I had an interview which happened the next day, I got the job and then there were three weeks left. So basically, I had no time to actually go, and I wanted to come in and do this job. It was, ‘Oh, okay, I’m doing this job. And how can I do this for three weeks?’ So, I figured this, ‘yes, go for it. What do I have to do?’

“Like, I know I can do a good job with it. But then you know, all these things that I think, you know, you take in one obstacle at a time and you don’t add them up. You might do it at the moment, but you don’t really see them all at the same time. And now when I’m talking about interviews all the things that were kind of like an obstacle that we normally don’t want to like we want to meet the actor. I didn’t get to meet Jared until the first test. No makeup. You want more than three weeks. You want to have time to change things. You don’t want an actor with really long hair that’s going to go bald. So, all these things that we have to overcome.”

Lundström is now working on The Batman, where he oversaw Colin Farrell’s staggering transformation into The Penguin. Once again, he has made an actor completely unrecognisable in the role.

House of Gucci is available to buy on Blu-ray and DVD now and is also available for digital download on Amazon Prime.

House of Gucci: Behind the scenes of Jared Leto’s incredible transformation