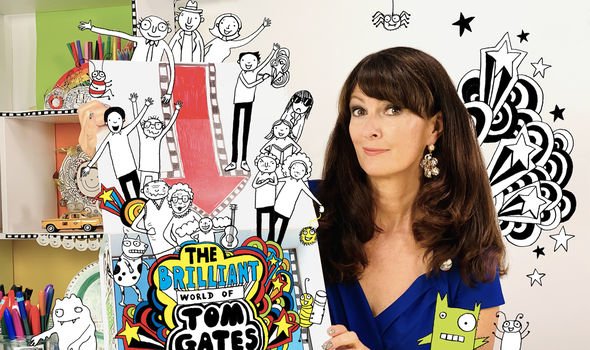 Her name is Liz Pichon and she is a 57-year-old children’s author and illustrator, but in her head she is 10-year-old schoolboy Tom Gates – star of a hugely popular book series. Talking to Liz, it soon becomes clear that all her plots featuring the doodling schoolboy beloved of generations of ­children, come straight from her own experience and feelings. “I try always to put the publishers out of my head and think about what I would want to read,” says Liz, with her trademark enthusiasm. “I devoured The Beano growing up as I’m dyslexic and the squares of pictures really helped me to grasp the story. Now I want every page to have a page-turning moment, as well as drawings, details, ­doodles and jokes.”

This approach has made Liz very successful indeed. Over the past decade, she has sold more than five million copies of her novels, each of which is designed to look like a child’s dog-eared exercise book. This year is the 10th anniversary of Tom Gates and will see the publication of Ten Tremendous Tales, the 18th book in the series.

What’s more, a new TV show, The Brilliant World of Tom Gates, has just launched on Sky. It’s a mix of animation and live action, with additional songs, games and crafts. It features the voice of actress Catherine Tate, and segments where Liz gives tips on how to draw the characters at home.

“I’m always collecting new ideas,” she says of the Tom Gates filter through which she views the world.

“I said to the publisher – ‘yes, and I’m putting a flip book in the corner’. I quite enjoy being surprising. I want the books to include everything I loved as a kid; cartoon strips, jokes, hobbies, pets, friends. I’m mining my own life.”

And, in so doing, the former graphic designer has turned generations of reluctant readers into children who realise that, maybe, reading might be for them after all…If reading can be like this.

All of Liz Pichon’s plots come straight from her own experience and feelings (Image: Getty)

“I remember giving a talk in one school and being met by a teacher who laughed and said, ‘We’ve had to work really hard to wean the children off your books’. It was intended as a compliment, but it made me sad. There is an idea that because picture books are full of drawings that they are not real books. But there is room for all types.”

She ardently believes that whatever makes a child turn a page is a good thing.

“I’ve met lots of creative people who loved comics when they were growing up, including Eric Carle who wrote The Very Hungry Caterpillar and former children’s laureate, Malorie Blackman.

“Visual storytelling fires up your imagination, and really great picture books work on so many levels – from the font and layout to the artwork and story itself,” she says.

To promote the brand and help kids think creatively, Liz now runs workshops and roadshows to get children drawing in her easy-to-imitate style.

“The way you learn is by looking at things and copying them. They don’t have to be perfect. My drawing is not the best – I’ve got friends who are illustrators and I could never draw like them. But the message behind my books is that it doesn’t have to be perfect, just have a go and don’t worry about making mistakes.”

The dyslexic author wanted to communicate the message that things don’t have to be perfect (Image: NC)

For Liz, the daughter of a sweet salesman, this was an especially important perspective due to her dyslexia – a condition also ­experienced by her son Zak, 29, the eldest of her three children with record producer Mark Flannery. The couple also have daughters, Ella, 26, and Lilly, 22.

“Mine wasn’t a formal diagnosis in those days, but my parents were certainly ­scratching their heads. At school, I was very enthusiastic and always wanted to have a go, but all my creative writing was filled with red pen. That spelling!”

Her friends recognised her gift for drawing, but tests taken when leaving primary school limited her secondary school choices.

“My mum was very good at making things, and so was I. But I was always made to feel at school that being good at drawing or being creative was never as good as
anything else.”

She says she can still break into a cold sweat when she recalls the humiliation of maths lessons. “My brain didn’t work like that and I was always one of the last to be let out if we were doing our times table. If I could remember just one, and if that one came up, my hand would shoot up. I was so desperate to do well.

“We used to have sessions covering our books in paper – that was always my ­favourite part of school.”

However, she found secondary school art lessons deeply frustrating. “I remember that we were given the inside of a green pepper to draw, and then a lupin. Mine didn’t look right and neither did my friends’ drawings. Some of them were really good at cartoons, but comics don’t have the same heft.”

Her son Zak’s dyslexia was coupled with Asperger’s which she said made learning to read and write even more of a challenge for him than it had been for her.

“My son had a lot of problems when he was younger, including speech problems and with his hearing. His issues were far worse than mine – he didn’t read and write until he was 11, and we realised he needed professional help. It was really difficult for him at school.

“But he was always trying to do things, so we were really pleased when he was able to attend a specialist dyslexic school when we moved from London to Brighton. He had a funded place and was there from 10 to 16.”

The illustrator appeared on the main stage at Bestival three years ago and held a drawing workshop (Image: NC)

For her part, Liz went on to Camberwell School of Art where she studied graphic design, thrilled at last to be immersed in the language of a visual world which she not only understood but at which she excelled.

This led to a job as an illustrator designing greetings cards, T-shirts and eventually ­picture books written by others; her nadir being a long stint doing the drawings for Enid Blyton Bible Stories.

“I realised that I couldn’t draw any more beards or sandals, and it really got me ­thinking,” she recalls. “As an illustrator you put such a lot of work into each page and everything you do tells a story. It also takes a really long time. I realised that I should be writing my own stories and illustrating them, rather than working for others.

Liz ardently believes that whatever makes a child turn a page is a good thing (Image: NC)

Now Liz channels him whenever she can.

“One of my previous jobs was designing record covers, so I put Tom in a band so we could have live music at our events.”

She even appeared with the band on the main stage at Bestival three years ago and held a drawing workshop live on stage. She also took up doodling Tom Gates-style on her shoes with a Sharpie pen as a way of connecting with her readers.

“The children in schools I visit always spot my shoes. I love the idea of showing kids that you can take an idea and turn it into something. Do it,” she says of life, and this could be her mantra: “Don’t wait to be asked to do it.”

● Tom Gates 18: Ten Tremendous Tales by Liz Pichon (Scholastic, £12.99) is out now. To pre-order with free UK delivery, call Express Bookshop on 01872 562310 or order via expressbookshop.co.uk The Brilliant World Of Tom Gates is available to watch now on Sky Kids on demand.