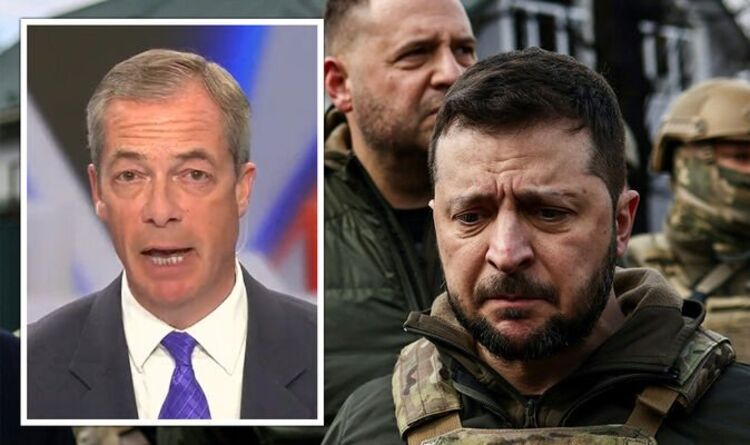 Nigel Farage lashed out at the European Union (EU) for reportedly sending almost €1 billion to Russia each day for energy since the invasion of Ukraine began. His scathing monologue on Wednesday’s GB News came after the EU’s top diplomat, Josep Borrell Fontelles, stated the EU has given Russia €35 billion since February 24, whereas Ukraine has received €1 billion in military aid. Nigel went on to praise “Brexit Britain” for leaving the EU.

Nigel began: “Good evening, well there is universal condemnation from Western leaders of the actions of Russia, much talk about war crime trials which will be held later on but also lots of very tough talk on sanctions.

“Sanctions are being imposed on individuals so much so that Roman Abramovich is having to borrow money to pay his staff because he can’t use his bank account.”

Roman is an oligarch and politician best known outside Russia as the owner of Chelsea Football Club.

Nigel continued: “And we see endless rounds of applause for the new hero President Zelensky of Ukraine.

“But sometimes I think that it is quite useful actually, despite the pledges from the UK Government to end this year imports of oil and coal and the European Union themselves saying they will stop buying coal from Russia by the end of the year, I think it’s useful sometimes to follow the money to see what is really going on.

“Today the ruble traded higher against other international currencies than it was trading at before the invasion of Ukraine which tells you a lot.

“And that is not just because the newly elected leader Victor Orbán of Hungary has agreed to pay in rubles.

“Now I will tell you what is really going on and this was made clear yesterday.

“Since the invasion EU countries have paid €35 billion to Russia for oil, gas and coal and, wait for it, given a grand total of €1 billion to Ukraine in the form of aid.

“In many ways, Brexit Britain, now freed from the EU, freed from EU foreign policy has taken the lead which is perhaps why President Zelensky is constantly praising Boris Johnson’s efforts.

He added: “All I can say is it is episodes like this which say to me thank goodness we’ve left common foreign policies, emerging common energy policies, I am certain we can do it much, much better.”

High Representative of the EU for Foreign Affairs and Security Policy Josep Borrell told the European Parliament how much the EU had paid Russia for energy on Wednesday.

He also pushed for more sanctions on oil and coal to be levied against Russia’s President.

He said: “We have given Ukraine 1 billion euros… but a billion euros is what we pay Putin every day for the energy he provides us.”

“We have to continue arming Ukraine. We need fewer rounds of applause and more assistance,” he added.

The diplomat made the comments as the EU debated the fifth round of sanctions against Russia.

He added: “Zelensky needs us to tell him less often that he is a hero and give him more weapons to fight.

“That’s what Ukrainians expect from us and that’s what we’re doing, and we must do it faster. Putting pressure on Russia and arming Ukraine. Help them to combat the invading forces with all the capabilities at our disposal.

GB News is available to watch on Freeview, Freesat, Sky and YouView.