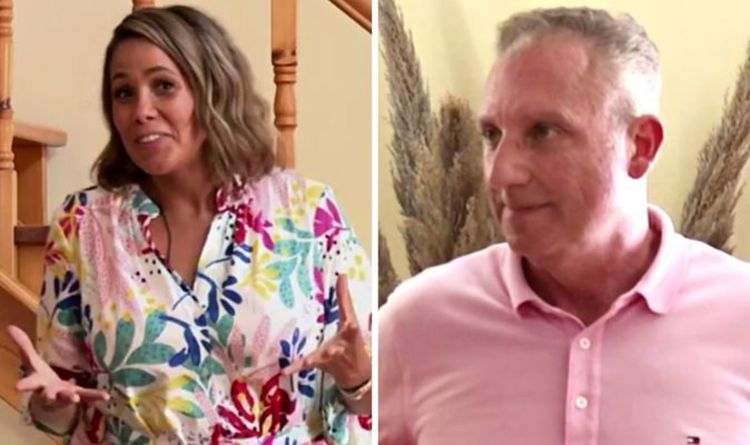 Joe and his partner Kirsty wanted to swap their Hampshire home for a house in the Spanish countryside. The couple, who met at work four years ago, wished to move permanently to Valencia and they hoped Jean Johansson would be able to find them their perfect property, complete with panoramic views. Jean’s search got off to an emotional start, and she even had to leave her buyers alone while Joe composed himself after getting tearful.

Joe and Kirsty decided then wanted to pack up their life in England and move near the Mediterranean Sea.

The first property they explored with Jean was a three-bedroom villa with a pool, which was on the market for £258,500.

Following the viewing, Joe admitted: “It’s a very nice house, I probably would prefer a more open plan kitchen but I am not going to rule it out.”

The couple hoped to find a property that included an outbuilding they could rent out for visitors or holidaymakers.

While the first property didn’t tick all of the boxes, Joe was brought to tears when he saw the second house Jean had selected for them.

“I can see you’re getting emotional, I’ll give you a moment,” Jean said to Joe as she left the couple to talk privately about their thoughts.

After composing himself and looking around the “breathtaking” villa, Joe told Jean: “The outside got me going as you saw and coming in to see the traditional feel has too. I like it a lot.”

Joe, who was born in Malta, said the traditional look of the farmhouse reminded him of growing up on the Mediterranean island.

The couple said the property “has everything” they could want in a Spanish home, but they were willing to look at another house.

However, when it came to the fourth property, Joe said he “wasn’t feeling it” before he’d even taken a look inside.

The three-bedroom property was set on four acres of land and there was a rental opportunity too as there was an outbuilding.

After looking around the inside, Joe said: “It’s lovely but it’s just not for me, my heart is just not feeling it.”

The fifth and final property was a traditional villa which was on the market for £343,000, which Joe and Kirsty both highly approved of.

After sleeping on their decision, the couple met with Jean the following day.

“I couldn’t hold back some of my emotions,” Joe added when opening up about getting emotional throughout the property search.

They told Jean they wanted the third property but needed more time to discuss the house between them.

And it didn’t take long as a few weeks on the couple had an offer accepted on the converted farmhouse.

A Place In The Sun airs weekdays at 3pm on Channel 4.